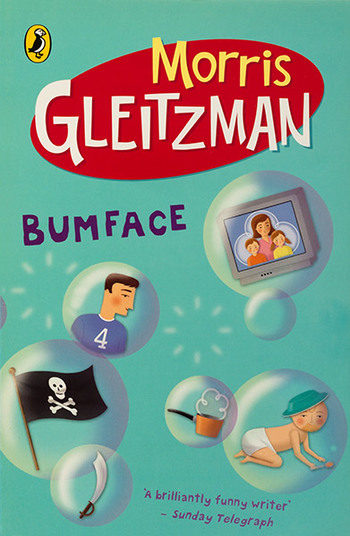 Bumface was a 1999 children's book for kids aged 9 - 12, written by Australian author Morris Gleitzman. It won several awards (oddly, including both the Bilby Award for Older Readers, and COOL Award for Younger Readers) .

Angus wants to be Bumface, a pirate character he has created. Bumface is brave, bold, wild and free. He stars in the stories Angus tells his younger brother and sister.

Instead, Angus is just plain tired from having to change his sister Imogen's nappies and scraping food off the walls. He has to look after his siblings while his famous soap opera actress mother works and chases men, and his father and stepfathers claim they don't have time to look after their own children. Angus doesn't want to be mum's "Mr. Dependable" or dad's "Mr. Reliable" anymore. As far as he's concerned, if his mother has a baby with her newest boyfriend, it would be a disaster. So Angus comes up with a bold and brave plan to stop her getting pregnant... and then he meets Rindi. Suddenly, his problems don't seem quite so bad.