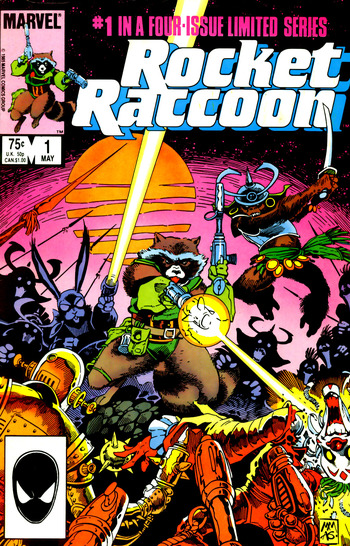 Saving Halfworld one shot at a time
Now Somewhere In the Black Holes of Sirius Major There Lived a Young Boy Named Rocket Raccoon
Advertisement:

Rocket Raccoon is a Marvel Comics character created by Bill Mantlo and Keith Giffen, first appearing in Marvel Preview #7 (dated Summer 1976) as a supporting character for Prince Wayfinder in The Sword in the Star story. His next and mainstream appearance was in The Incredible Hulk #271 with Hulk teleported to Rocket's homeworld temporarily to finally gain his own 4-issue miniseries in 1985, illustrated by Mike Mignola no less, that continued the plot on that Hulk's issue.

His story goes as this: Rocket Raccoon comes from Halfworld, a planet in the Keystone Quadrant, inhabited by Funny Animals and Human Aliens called the "Loonies", descendants of the first humanoids on the Quadrant. To keep the Loonies safe, the former were genetically modified to guard and save them, getting their own consciousness and becoming a World of Funny Animals. Rocket is The Hero of the Keystone Quadrant, its guardian and savior, who has to struggle against the plans of Judson Jakes and Lord Dyvyne, who want to rule the Quadrant by themselves. Rocket also has various allies, such as his sidekick and partner Wal Rus, a walrus, and his girlfriend Lylla, an otter who's also the Damsel in Distress of the series, as well having his own Cool Spaceship, the "Rakk 'n' Ruin".

After the mini-series, Rocket all but disappeared save for a few guest appearances in the pages of She-Hulk and Quasar in The '90s. It wasn't until the 2007 event Annihilation: Conquest in which he appeared again as a support character for Star-Lord with his backstory and personality changed completely, now being an Anti-Hero instead of a straight hero, as a kind of rebooted character.

For the current version of Rocket (post-Annihilation), see his main page as well Guardians of the Galaxy and Rocket (2017).