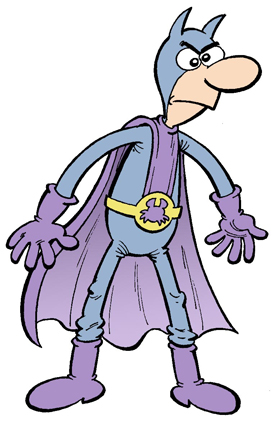 A hero you can trust
Advertisement:

Pafman is a Spanish comic series created by Joaquín Cera. It features the adventures of Pafman, the world's dumbest superhero, and Pafcat, his Mad Scientist sidekick.

Pafman began in 1987 as a weekly 2-page comic with self-contained stories in the Mortadelo magazine. The series changed to a 4-pages format and, later, Cera started to create long stories beside the self-contained ones. In 1996 Ediciones B (the publisher) closed all its magazines and discontinued all its comics except Mortadelo y Filemón and Superlópez.

In 2004 Pafman came back with a long-story album per year but, since then, the series is being threatened of cancellation because of low sales.note Pafman's sales are pretty good for the Spanish market, but Ediciones B seems to be used to the big figures of Mortadelo y Filemón and, somewhat, thinks that Pafman's aren't high enough.