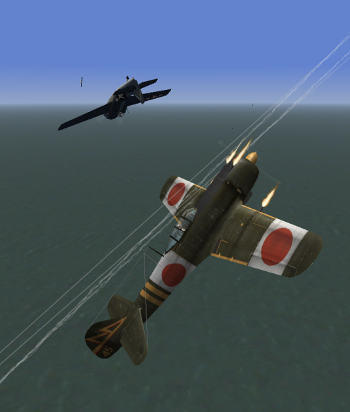 Highway to the Danger Zone
Advertisement:

Aces High is a Massively Multiplayer air-combat simulator by Hitech Creations. Similar in style to (and in fact partly descended from) the earlier Air Warrior and Warbirds series, the game features aircraft, vehicles and surface craft from World War II covering the armies, navies and air forces of the United States, Great Britain, Germany, Italy, Finland, Japan and the Soviet Union, along with four World War I fighter aircraft (two each from Great Britain and Imperial Germany). The main part of the game are the Main Arenas (divided into Early, Mid and Late War periods, as well as WWI) where players are divided into three teams and can fly any aircraft against each other regardless of their nationality. Other aspects of the game include a dueling arena, and an arena focusing on historical aircraft match-ups. In addition, there are frequent special events including Friday Night Squad Ops, a series of campaigns with historical matchups and defined objectives, as well as snapshots and scenarios focusing on historical events. Commemorative events for historical engagements such as the Battle of Midway are also frequently run on the anniversaries of these engagements.

There is also an officially-hosted yearly gathering of Aces High players, where the traditional "Evil Con Mission" enables a joke plane available to fly by attendees. This has included flying PT Boats and even alien starfighters. Recent versions have also added an offline mission mode, allowing players to fly offline against AI-controlled opponents.

Unlike many other MMO air-combat simulators, Aces High lacks a "relaxed realism" flight model option, so even beginning players are subject to the full physics and flight modeling, giving the game a much steeper learning curve than others. The detail of the flight modeling is also aided by the fact that the main developer, Hitech, is actually a licensed pilot himself: A plane available in only offline mode is the RV-8

, the plane Hitech flies in Real Life and uses to test the physics model for accuracy.

The title has been active since the early-2000s and has gone through multiple continuous versions and updates to its flight model and graphics, as well as the addition of new aircraft and vehicles, having begun with fewer than a dozen in the original version until now there are now over 100 covering both sides of the conflict. New content is added regularly, and the community itself is encouraged to submit skins depicting historical aircraft and terrains for rotation in the main arenas. Aces High is subscription-based, ($14.95/mo) and unlike the similar but Free-to-Play War Thunder, almost all content is available to a new player from the beginning. Aces High does have "perk" aircraft, which require earning "points" from scoring kills to fly, but this is for balancing purposes as the affected aircraft (advanced machines like the Me-262, B-29 and F4U-4) would greatly unbalance arena play.