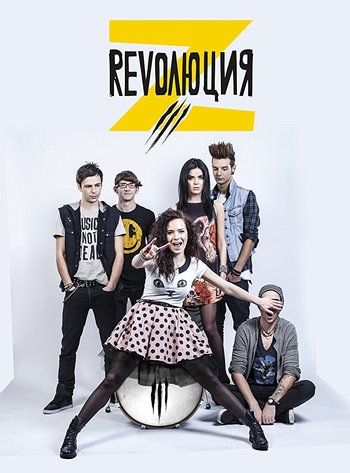 Revolution Z: Sex, Lies and Music (Bulgarian: Революция Z: Секс, Лъжи и Музика, stylized as RЕVОЛЮЦИЯ Z was a Bulgarian Slice of Life high school series about a group of teens forming a rock band. The series lasted for 4 seasons and 50 episodes which aired from 2012 to 2014 on the country's number one private TV network, bTV.

At the 197th School in Sofia, Bulgaria, ninth-graders Konstantin ("Tino") and Boyan ("Bobby") decide to start a band, which has always been Tino's dream. They quickly find a drummer when they discover the talent of the school's nerd, Filip, and a singer in Ani his best friend who has an immediate spark with Tino. The new transfer student, Mira, arrives to cause trouble and take over the school, including the local hip-hop crew headed by Gencho (Ghetto2nite) and "Sony Bonanza", Tino and Bobby's rivals. As is typical for teenagers, almost all of them have issues with their families.

The school's teachers have their own set of problems intertwining with those of the students: Mr. Tsekov, the headmaster, strives to run a tight school while balancing tensions with the math teacher, Ms. Pesheva. The physics teacher, Mr. Savov, is trying to still be young despite being stuck as a teacher instead of a brilliant physicist, as well as to survive the PE teacher, Ms. Marinova, and the lit teacher, Ms. Dimitrova, fighting over him. When he's put in charge of Annie, Filip and Mira's class at the start of the school year, it only adds to the drama.

This show includes examples of the following tropes: