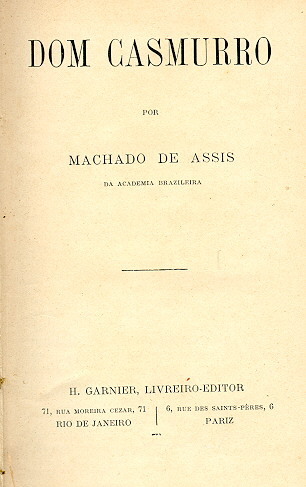 Original cover of the 1900 version.
Everything comes to an end, reader. It is an old truism to which may be added that not everything that lasts, lasts for long. This latter part is not readily admitted; on the contrary the idea that an air castle lasts longer than the very air of which it is made is hard to get out of a person's head, and this is fortunate, otherwise the custom of making those almost eternal constructions might be lost.
— Dom Casmurro, Chapter CXVIII
Advertisement:

Published in 1899, and considered by critics as one of Machado de Assis' masterpieces, and still taught at most brazilian schools today, Dom Casmurro is written as a fictional memoir where the narrator and main character, Bentinho (Bento de Albuquerque Santiago), recounts the story of his life, beginning with him being sent to a seminary to become a priest, but later moving to be a lawyer and marry his childhood friend, Capitu (Maria Capitolina). The climax of the story is when Bentinho begins to suspect that Capitu cheated on him with his best friend Ezequiel de Sousa Escobar, and that their child is not really his.

For years, the story was acclaimed, but considered as simply the tale of a man cheated by his wife. However, in the early 60s, american literary critic Helen Caldwell

, popularized the theory that the book was intended to be ambiguous. Caldwell argued that Bentinho was a jealous, paranoid unreliable narrator whose account couldn't be completely trusted. From that point on, the debate over whether Capitu was unfaithful or not (and before that, if such ambiguity really was intended by the author in the first place) raged on.

Regardless of that, its witty, sarcastic humor, and later the ambiguity over whether or not the infidelity did happen contribute to the still-ongoing popularity of the book.