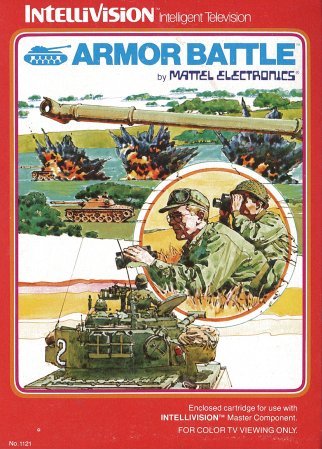 Armor Battle is an Intellivision game published by Mattel Electronics, which was also ported to the Atari 2600 as Armor Ambush.
Advertisement:

In the game, you and another player both have 50 tanks, with two tanks appearing at a time on the screen, though you can only control one tank at a time. Your tanks are placed in randomly-generated playfields with various types of terrain (water, forest, grass, roads, buildings) that you must navigate through in order to destroy both of the other player's tanks before both of your own tanks are destroyed. You and the other player can also lay a single mine which can destroy either your tank or your opponent's tank once it is driven over. The player who has the most tanks when the other player has lost all their tanks wins.