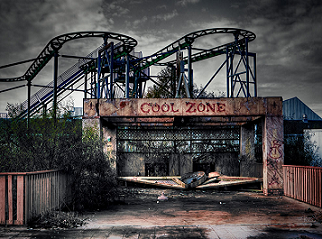 Now who doesn't love theme parks? They're some of the best places to go to for escapism, excitement, and fun.

... except when there's something in the park that will scare your pants off. And it's made worse because of the fact that here, you're not watching something scary on a TV screen as usual. Here, you're right in the middle of it.

Whether it be some ride about ghosts or the undead, Halloween park events, stuff that wasn't meant to be creepy but ended up being anyway, or even entire parks that have been left abandoned and are now rotting away, you will find all sorts of examples here. Solo-attractions that aren't at any theme parks, especially including haunted house attractions, will also be covered here.

open/close all folders
Fort Edmonton Park's Halloween Spooktacular
Fort Edmonton Park. Ah, that little old folksy historic museum park in Edmonton, Canada. It's always a fun and happy go lucky place, right? Except for Halloween season, when for two nights near the end of the month of October, a collective of ghouls ranging from student-age to adults decide to turn the place into a spooky good times then it's downright terrifying. The show has always been aimed at people aged 16 and over, though in recent times they have made it a bit more kid-friendly (the 2014 season, however, will be making it a bit Darker and Edgier).
Other Theme Parks
Abandoned Theme Parks
Advertisement:
Haunted House Attractions
Other Non-Theme Park Attractions