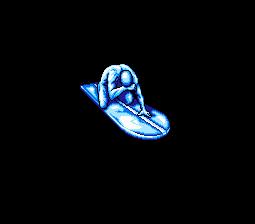 You'll be seeing this screen a lot.
"Imagine if I were to draw a maze on a sheet of paper. I'm asking you to draw a line from the beginning of this maze to the end. You can't run into any dead ends, and you can't touch any of the lines. Now, while you're trying to do this, I'm moving the maze to the left. It would drive you fuckin' nuts."
— The Angry Video Game Nerd (Silver Surfer review

Silver Surfer is an auto scrolling Shoot 'em Up with Side View and Top-Down View levels, based on the comic book series. It was developed by Software Creations and released in 1990 for the Nintendo Entertainment System. It is considered one of the hardest games ever made.

You play the Surfer, shooting his way through five three-section levels. You can choose which level to play, just like Mega Man. At the end of each level, you fight a Boss Battle against a villain from the Silver Surfer comics universe, and gain one piece of a Dismantled MacGuffin, known in-game only as the "device". Once you have finished all five levels, Galactus sends you into the Magik Domain to retrieve the final piece of the device. After more shooting and a Final Boss (a giant purple guy with a huge pistol, despite the boss mugshot featuring a picture of what appears to be Mr. Sinister, who is neither a Silver Surfer villain or even actually appearing in the game beside the mugshot, and not the master of the Magik Domain either) you retrieve the final piece of the device. Galactus says "It's mine!", but the Surfer says "No, it's too dangerous"

and hides it away. The end.