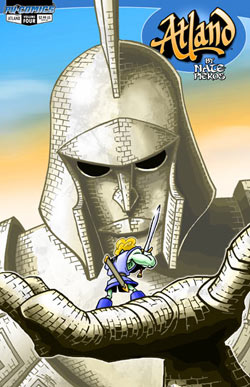 is a fantasy webcomic by Nate Piekos, the guy who also runs the font design Web site Blambot

. It follows the journey of the newly resurrected swordsman Barry the Brave, raised back from the dead by Lily White, the priestess of the local goddess of love. Lily has been chosen by her order to be the one to stop The End of the World as We Know It, and she needs all the help she can get.

Started in 2004, Atland ran every Thursday (except the last Thursday of the month), until the creator concluded it in 2012.

In early 2015, however, the strip returned for another story arc, though how long it will last is currently unknown.