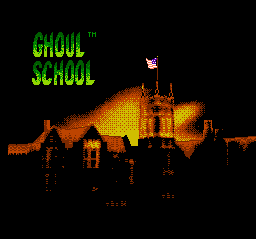 Ghoul School is an early entry in the survival-horror genre of video games having been released on the Nintendo Entertainment System in the year of 1992. It was developed by Imagineering and published by Electro Brain.

You play as Spike O'Hara, a delinquent from Cool School (which later gets turned into GHOUL SCHOOL! ...ya, get it?) who comes across a magical skull which keeps growing bigger. He decides to give it to Dr. Femur in the science lab at school for studying. The next day, he returns to find that the school is overrun by monsters.

Spike must travel through over 200 rooms in the school looking for items in order to save Samantha Pom-Pom. The school cheerleader and Spike's secret crush.

In the end, the game comes off like a B Horror Movie with no script, and remains a Cult Classic for the few gamers who've heard of it.

It was infamous for its buggy controls, poor hit detection, and weird set-up. The game had a lot of Guide Dang It! moments including the elevator sequence and the basketballs in the gymnasium.

Has nothing to do with Scooby-Doo and the Ghoul School.