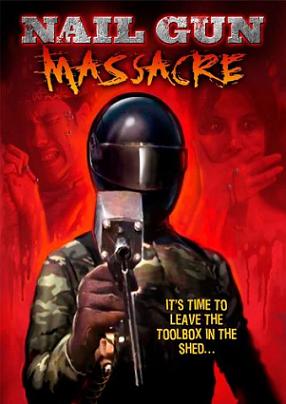 Extreme Paintball.
"Remember when you could go outside without having to worry about the mosquitoes or the killers?"
— The Shopkeeper
Advertisement:

The Nail Gun Massacre is a 1985 Slasher Movie.

Set in a small rural Texas town, the film opens with a young woman named Linda, co-owner of a lumber yard with her brother Bubba, being viciously assaulted and gang raped by a group of construction workers after dropping off some material for them. For unexplained reasons, Linda's attackers escape prosecution, and walk free of any consequences for their horrendous act.

Some five months after that debacle, one of the rapists is confronted and killed in his home by a wisecracking, nail gun wielding assailant decked out in army fatigues and a black, taped up motorcycle helmet that masks their voice, giving them a sinister demonic drawl. A month after that brutal murder, two other construction workers, young men named Mark and Brad, are nail gunned in the woods while chopping wood, only about half a mile away from the first victim's house. With three murders in a town that hasn't had any in the last ten years, locals Sheriff Thomas and Doctor Rocky Jones (almost exclusively referred to as "Doc") team-up to track down the killer, who is rapidly accelerating when it comes to perforating citizens, and seemingly spiraling out of control, attacking people unrelated to the gang rape which they are seemingly avenging.

As the sheriff and doctor conduct their investigation, more potential innocent victims turn up in the form of a trio of friends named Tom, John and Maxine, who move into the first victim's house, seemingly the center point of the ongoing massacre, along with old County Line Road, which a mysterious golden hearse has been prowling as of late.

An anniversary edition DVD of the film was released by Futuristic Films in 2004, and was followed by another DVD release, this one deemed a special edition, in 2005; that one was put out by Cult Classic distributor Synapse.