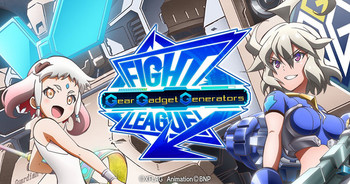 Be the Best Together
Fight League was a turn-based battle game developed by XFLAG (better known for Monster Strike) for iOS and Android. Billed as an "all-out tag-team board game", it released in Japan, South Korea, Taiwan, Hong Kong, Macao, and Canada in June 2017. The English servers were closed down in June 2019, while the original Japanese version ended service after March 2020. The game was played on a 3x4 board and emphasized unit placement in order to create chain and combination attacks; the goal of the game was to reduce the leader character's health to zero.
Advertisement:

An anime adaptation produced by Bandai Namco Pictures, Fight League: Gear Gadget Generators, released on YouTube between February and August 2019. Consisting of 26 ten-minute episodes, the anime focuses on the GGG, one of Fight League's five "brands" of fighters. Though the original uploads are region-locked, Crunchyroll picked up the distribution rights to the series, where it is available with English subtitles.

Not to be confused with Fight Club (or its source novel).

Tropes related to the original game: