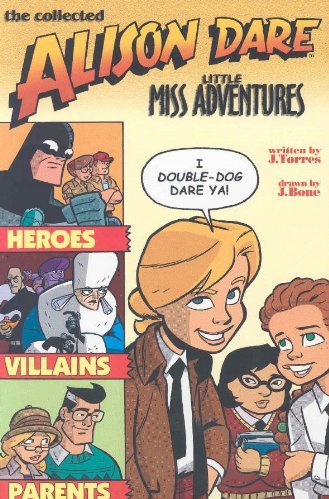 Alison Dare is not your typical twelve-year-old. She's the daughter of an archaeologist/adventurer and the masked hero known as the Blue Scarab. To top it off, she's also the niece of an international super-spy; it's no surprise that a craving for danger is in her blood! Unfortunately, her parents have locked her away at the prestigious St. Joan's Academy for Girls, hoping that this would lead to a more "normal" life for their daughter.

A pair of graphic novels (Little Miss Adventures and Heart Of The Maiden) by J. Torres and J. Bone. They were originally published by Oni Press and republished by Tundra Books. The series is influenced by stories such as Indiana Jones and Tomb Raider, and details her multiple adventures, as she finds trouble at museums and Arabia, uncovers a school mystery, and tries to get her parents back together.