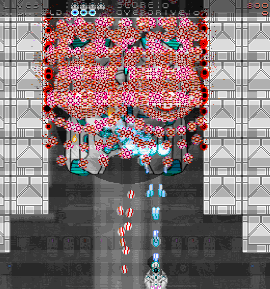 ...And then you realize that you're only playing on Normal. That's not even a miniboss.
The Intro: "OMG HOW DID ALL THESE BULLETS GET HERE THIS IS IMPOSSIBLE"
Advertisement:

XOP is a series of Bullet Hell shooters by Christopher "Udderdude" Emirzian. The games, unlike most ShootEmUps are relatively plotless, with the plot basically being, "There's stuff to shoot. Now go shoot it. Also, bullets. Lots of them." Each game has an arcade mode with various courses, score attack for each level, boss rushes and the option of recording demos of gameplay.

These games have examples of: