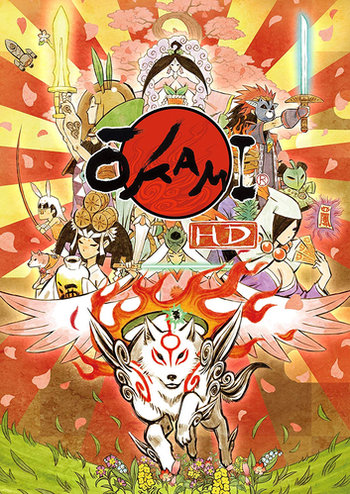 "Ah... Amaterasu. Origin of all that is good and mother to us all..."
— The Celestial Brush Gods at several points in the game
Advertisement:

Long ago, in The Time of Myths, the eight-headed serpent Orochi lorded over the village of Kamiki, demanding a sacrifice every year on the night of the full moon. During the weeks before the day on which the sacrifice was chosen, a large white wolf — dubbed Shiranui by the villagers — would be spotted roaming the outskirts of the village. Many of the villagers suspected that Shiranui was Orochi's familiar. One warrior, Nagi, made it his mission to slay the wolf, but every time they met, Shiranui would manage to get away.

On the night of the 100th sacrifice, a maiden by the name of Nami — whom Nagi harbored strong feelings for — was selected to be offered to Orochi. Refusing to accept this, Nagi traveled to Orochi's cave to destroy the monster. However, Orochi proved to be far too strong for Nagi, and it appeared that he would kill the man.

But when Orochi was about to deal the final blow, a howl was heard. Shiranui appeared and fought Orochi in Nagi's place, proving an equal match for the serpent. In the end, the wolf gave her life so that Nagi could triumph. In Shiranui's honor, a shrine was constructed in Kamiki Village and the sword that slew Orochi, dubbed Tsukuyomi, was sealed away in the snake's cave in order to prevent his revival. All the while, the villagers never realized that, in reality, the wolf was sun goddess Amaterasu in physical form.

100 years after these events, an unnamed man, acting on his own curiosity, removes Tsukuyomi from Orochi's cave, allowing Orochi to revive himself and spread his influence over most of Nippon.

Sakuya, wood sprite and guardian of Kamiki Village, realized that something needed to be done and revived Amaterasu's body so that she may defeat Orochi once more. However, both her weakening powers and Nippon's loss of faith in the gods has left Amaterasu greatly weakened. Adding the fact that Nagi's descendant, Susano, appears to be useless, it looks like it will be a severely uphill battle for Amaterasu to defeat Orochi...

And that's just the intro of the game.

Made by Clover Studio and released in 2006, Ōkami is an action/adventure game in the vein of The Legend of Zelda series, except using classic Japanese Mythology and folklore as the basis of its setting. Players take on the role of Amaterasu, a Physical Goddess who takes on the form of a white wolf to battle the forces of darkness that are sweeping across ancient Japan. She wields a magic paintbrush that can be used to alter reality and is accompanied by a tiny loudmouth named Issun. Amaterasu and Issun travel across Japan fighting evil, gaining new magical powers, meeting a cast of odd and eccentric characters, and living out the "true stories" behind many of Japan's most famous myths.

A sequel was released for Nintendo DS by the name of Ōkamiden, starring Amaterasu's son Chibiterasu.

In 2008, Capcom released a port of the game for the Wii which incorporated the Wii's motion controls for the Celestial Brush. Sadly, this version removed the credits sequence because it contained the original company's logo. In 2009, an improved version of the Wii port was released in Japan, which fixes most of the issues regarding the motion controls and the combat system, as well as including the removed credits sequence back in the game.

joined the playable roster of Marvel vs. Capcom 3. Before that, in 2008, Yami showed up as the Final Boss of Tatsunoko vs. Capcom.

Not to be confused with Senjō no Ōkami.