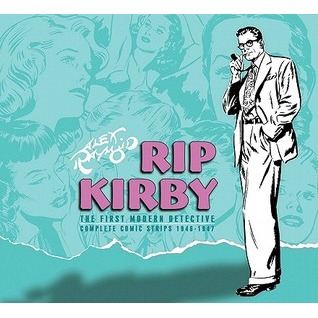 A newspaper comic strip about a debonair and intelligent private detective who also happens to be good with guns and fists.

Rip Kirby was created by Alex Raymond, who was also the original creator of the Flash Gordon comic strip. When he returned from serving in World War II, he discovered that the syndicate had given that strip to another artist and wouldn't let Mr. Raymond take it back. As a consolation prize, they offered a much better financial deal if Mr. Raymond could come up with a new strip for them. After some consultation with the editorial staff, Mr. Raymond chose to make a detective strip, featuring a man who was a combination of cerebral and hardboiled, while also being very modern and "cool".

Rip Kirby was a man of many talents: athlete, scientist, amateur (later professional) sleuth and decorated Marine reservist. He was ably assisted by his British manservant Desmond, who was a former safecracker. While many attractive young women visited the strip, Rip's primary romantic interest was fashion model Honey Dorian, a sweet-natured blonde. Her most common rival was Pagan Lee, a dark-haired gun moll who'd reformed for love of Rip and become a movie star under the name Madelon.

Beginning in 1946 and running 53 years (though Alex Raymond died in 1956), it was a popular and influential strip.

Tropes seen in Rip Kirby include: