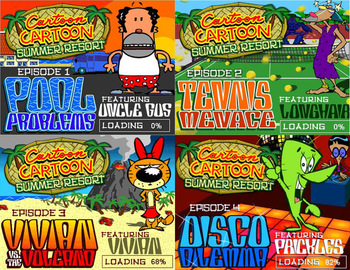 As their name indicates, the games take place in a summer resort for Cartoon Cartoon characters. Each episode features a problem that threatens to disrupt our favorite animated friends' peaceful vacation, and it's up to you to solve it. Along the way, you will also need to help the guests with their own personal issues.

The games date from the mid-early noughties and have since been removed from Cartoon Network's website. They also run on the discontinued Adobe Shockwave. This makes actually getting to play them a bit more challenging than it used to be, although they can still be accessed if you know where to look and what to do. The four episodes have been archived by BlueMaxima's Flashpoint

The games feature characters from: