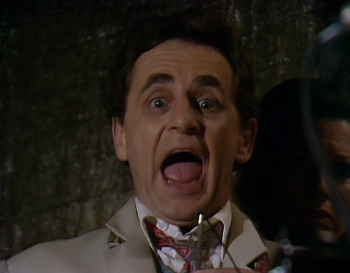 Doctor Who, in all its myriad incarnations, is a bountiful supply of ham. It's one of the things that makes the series so fun.

open/close all folders
The Doctor
In general, the Doctors can ham it up to glorious extents. Of course, depending on the situation, this can either be good or bad for those who cross them.
The Master
Not to be outdone by his arch-nemesis, the Master is always a prime source of Ham. Really, any incarnation of the Master who doesn't rattle the heavens and leave teeth marks on the scenery through the sheer force of their acting is just flat-out doing it wrong.
Other Villains
Advertisement:
Other Characters
Expanded Universe