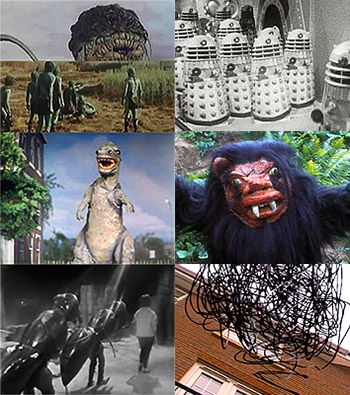 The BBC, doing what it does worst.note Effects pictured are, clockwise from top-left: Chopping the frame in half to edit in the Kroll in "The Power of Kroll", cardboard cutout Daleks in "The Power of the Daleks", a beast from "The Androids of Tara", a monster made from black packing tape in "Fear Her", ants with shoes in "The Web Planet", and plastic dinosaur Miniature Effects in "Invasion of the Dinosaurs".
Advertisement:
Look at this! It doesn't even wobble! I used to love that wobble!
— Peter Davison on the quality of the new TARDIS set, "The Five(ish) Doctors Reboot"

The original Doctor Who television series, particularly in its early years, brought home the cliché of "Incredibl(y Cheap) BBC Special Effects" to entire generations of fans. The shoestring-budget look has become one of the most warmly remembered parts of the show, and a major fear of many fans prior to the premiere of the new series is that it would look too well-done. Though Colin Baker's response to the people who "loved" the poor special effects is that you didn't love them: you tolerated them, you forgave them. Claiming otherwise is just your Nostalgia Filter operating. It really demonstrates that if the writing and acting is good (as most, but by no means all, of Doctor Who's has been), the audience will forgive pretty much anything else. It was still generally good for its time (compare other sci-fi from the same time period), except for the earliest seasons and the seasons made during the UK recession of the late '70s. In addition to being lovable because of its Special Effect Failures, there were times when the inability to properly articulate humanoid aliens or robots put them squarely in the Unintentional Uncanny Valley to pants-wetting effect.

Advertisement:
open/close all folders
General
Dalek disasters
Though they are the series' most memorable and terrifying recurring enemies, the Daleks have also been subject to some of Doctor Who's biggest special effects failures:
TARDIS-asters
The TARDIS is one of the most iconic parts of the series and the interior one of the most beautiful and imaginative sets, but it's not always looked its best:
Title sequence tragedies
Advertisement:
The Classic series is undoubtedly the worst for this sort of thing. With painful budgetary constraints, a punishing production schedule, frequent Troubled Production issues and a multi-camera 'televised play' style of shooting throughout its run that did not co-operate well with effects shots, there is something in every story to make viewers wince, even with the improvement of technology over the years.

Each era's failings are in a way that summarises the worst production aspects of that time period. The early 60s saw the show's lowest budgets, minimally edited episodes, cardboard planets and box sound-stage sets; the late 60s had People in Rubber Suits and monsters made of bath foam. The early 70s was dominated by hideous CSO; the late 70s was all austerity sets, community closets and malfunctioning props. The mid-80s has garish lights, brief setpieces that consume the budget of the rest of the season, and BBC apathy that progresses to purposeful production sabotage by the end of the 80s.