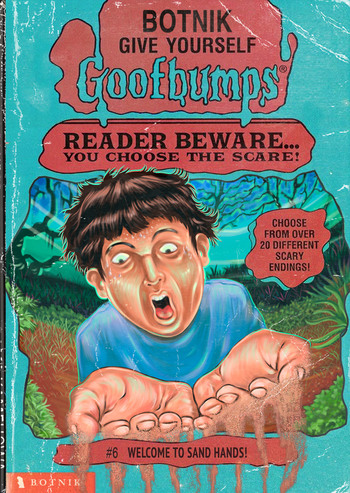 is a Gamebook “written” by the folks at Botnik Studios

using predictive text keyboards trained on books in the Give Yourself Goosebumps series, similarly to their other production, Harry Potter and the Portrait of What Looked Like a Large Pile of Ash. Like that work, this results in a hilarious mix of Word-Salad Humor, unintentional sarcastic parody and mind-melting insanity.
Advertisement:

Due to the nature of the medium, the plot varies depending on the choices you make, but the story is primarily about you and your cousin Zoe trying to get to school through a zombie-infested forest. Or, if you choose to stay home from school, you end up a middle-aged loser dad to two vampire children who walk all over you.

Oh, and at some point (as the title implies) your hands get turned into sand.

You decide to read the list of tropes. Zoe is the best at tropes.