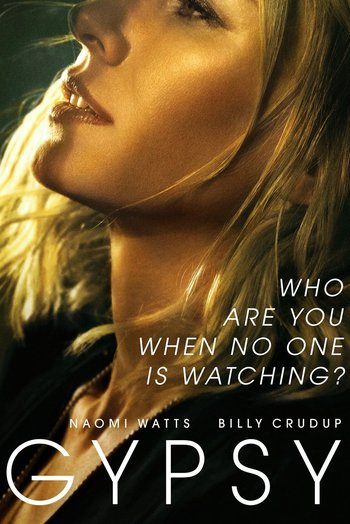 Underneath the suits, behind closed doors, we're all ruled by the same desires. And those desires can be raw and dark and deeply shameful. The more you watch someone, the more you realize, we are never really who we say we are. In fact, hidden underneath, there's always a secret. We might actually be... someone else.
Advertisement:

Gypsy is a Netflix original series that consists of ten episodes, all of which were released on June 30, 2017. Naomi Watts stars in the leading role of psychotherapist Jean Holloway who lives a double life as "Diane Hart" in order to infiltrate the personal lives of her patients and their loved ones. Billy Crudup plays Jean's husband Michael, Poorna Jagannathan plays her best friend Larin, and Karl Glusman plays Sam, a key patient.

The title comes from the song by Fleetwood Mac, and an acoustic version re-recorded by its lead singer Stevie Nicks was used for the theme song.

Despite ending with several plot threads coming to a head, Gypsy was cancelled by Netflix.

Not to be confused with the racial slur for the Romani people, which was a source of controversy

during the series' run, nor with the musical and film based off the life of burlesque artist Gypsy Rose Lee.