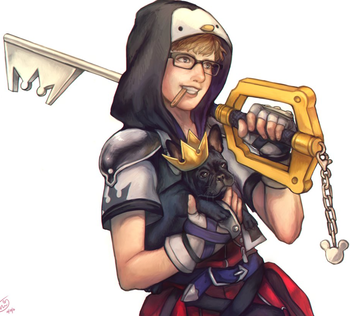 NicoB or simply Nico, whose real name has remained private, is an American YouTuber known for his Let's Plays. He is most recognized for playing anime-style games heavy in plot and puzzles, specifically RPGs and Visual Novels, though he has also done a number of series and one-offs that fall outside of that category.

A unique aspect of Nico’s commentary is his tendency to assign voices to different characters in each series, as well as ad-libbing their lines as he sees fit. As time has gone on, several of these voices have gained their own reputations in his videos, taking on the names of the characters they are most associated with. As a result, certain voices carry with them particular personalities, creating inside jokes between Nico and his subscribers that recur in various Let’s Plays. Nico has even created a small series

dedicated to them titled The Council of Voices.

Nico currently boasts around 200,000 subscribers, most of whom identify themselves as "Picky Penguins", the chosen name for NicoB fans established since the Persona 4 Golden Let's Play. This name overtook the previous term for the community, "S.S. LP", in popular usage, yet both phrases are still applied. Though the Picky Penguin community is far from the largest on YouTube, it is one of the more tightly knit ones with many familiar commenters. As of 2017, the channel also has a dedicated team of moderators (all Picky Penguins themselves) devoted to keeping Nico's comment section as friendly and inviting as possible. As of February 2022 after much deliberations Nico hires a full time editor, Sai, in order to help him alleviate the amount of work and burder that's been piling up over the course of past two years, finally allowing Nico to keep up with his promise of five LP videos per week.

NicoB has demonstrated instances of:

"Until next time, guys, stay classy."