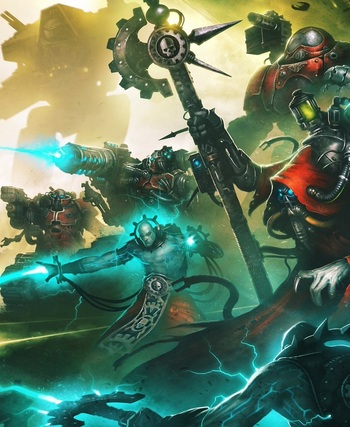 Lords of the Machine
Toll the Great Bell Once!
Pull the Lever forward to engage the
Piston and Pump...

Toll the Great Bell Twice!
With push of Button fire the Engine
And spark Turbine into life...

Toll the Great Bell Thrice!
Sing Praise to the
God of All Machines!
— Excerpt from the Catechism of the Autoculus of Mars
Advertisement:

In Warhammer 40,000, Mankind's golden age is long past, and many of its technological secrets have been lost. When the Emperor was reuniting humanity, he found on Mars a strange priesthood devoted to the preservation of what knowledge remained. This Mechanicum, later renamed the Adeptus Mechanicus, became a vital part of the Imperium, providing technical expertise, planet-wide factories known as Forge Worlds that produce everything from lasguns to civilian goods, and incredible weapons such as the Titan Legions. They are theoretically subordinate to the Imperium, and their highest-ranking member is one of the twelve High Lords of Terra, but the Machine Cult has its own specialized army, the Skitarii, and run the aforementioned Titan Legions, standing slightly apart from the Imperium of Man despite propping it up. Mars itself is not only the Mechanicus' capital, it's one of the most important Forge Worlds in the Imperium, and houses several Titan legions. They are, for all intents and purposes, their own independent state within the Imperium, and the two are inextricably linked by necessity.

The Adeptus Mechanicus are not just humanity's last source of technological knowledge; they actively worship machinery, and venerate the Emperor as an aspect of an entity they call the Omnissiah. They believe that all devices have a "machine spirit" that must be placated in order for them to function properly, and therefore the Machine Cult's maintenance rituals involve a lot of incense, sacred oils, and chanting. This is a bunch of ignorant superstition that should have no effect on how devices function...but nonetheless, it seems to help. They also hold that for humans to perfect themselves they must take on more aspects of the machine, and therefore undergo voluntary augmetic "upgrades," be they mechadendrites or other artificial limbs, or replacing the illogical half of their brain with a computer. Calling a Tech-Priest "more machine than man" is a compliment, and most Imperial citizens find the Priesthood of Mars hard to relate to, yet necessary.

While gifted mechanics and craftsmen, Adeptus Mechanicus orthodoxy holds that all technological advances have already been discovered, and they therefore place more emphasis on reverse-engineering or recovering old knowledge than they do on experimentation or upgrades. Thus, the Mechanicus has kept mankind's technology working for ten thousand years, but has made little to no technological progress in that time. In fact, they have actually regressed, making some starships, weapons, and other devices irreplaceable because the Tech-Priests don't know how to build them any more. They are a parallel to medieval craftsman's guilds in the way they preserve skill but quash innovation with a monopoly on technology.

Forces of the Cult Mechanicus: 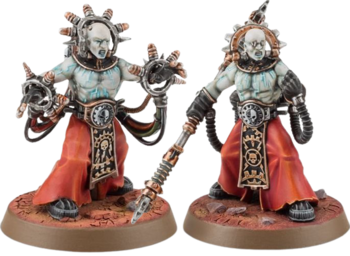 A Corpuscarii and a Fulgurite.

The Electro-Priests are a lesser order of the Cult dedicated to the Motive Force, an aspect of the Machine-God that represents electricity and the energy of life and motion. The Electro-Priests are divided into two sects that work in opposite fashions, representing opposite sides of an ancient dogmatic schism; the Fulgurites seek to confiscate energy from the unworthy, refusing to see their god's gift squandered on the heathen, while the Corpuscarii wish to share their divine gift with the world, usually in a very lethal manner. 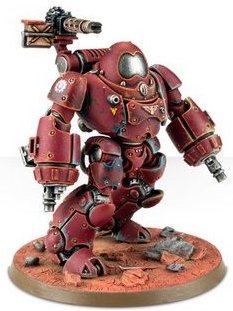 Dedicated to the manufacture and maintenance of robotics and automata, the Legio Cybernetica is one of the oldest divisions of the Adeptus Mechanicus. Originally devoted to the creation of artificial life, the Legio switched to the creation of automata outfitted with the intelligence of animals after research into true artificial intelligence was banned. The Legio Cybernetica fell further from favour in the aftermath of the Horus Heresy, as the majority of its members sided with the Arch-Traitor with the promise of the lifting of restrictions into their research. By the end of the 41st Millennium, only the near-mindless Kastelan Robots still see widespread use. 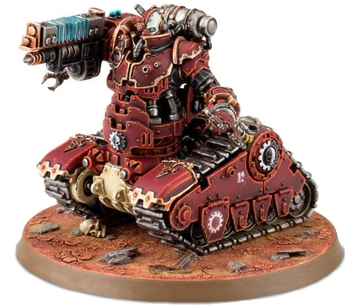 Near-mindless combinations of flesh and cybernetics, Servitors make up the vast majority of a Forge World's population. Originally developed due to the ban on artificial intelligence introduced in the wake of the rebellion of the Iron Men at the end of the Dark Age of Technology, Servitors fulfill many roles, from mono-tasked labourers designed to perform a single function without thought or rest until they wear out, to technical assistants that assist Tech-Priests in their tasks, and battle servitors that act as living weapons and guardians for their masters. While most Servitors are created from vat-grown bodies, some are made from criminals sentenced to "Servitude Imperpituis", so that they can atone for their sins against the Emperor and the Omnissiah. 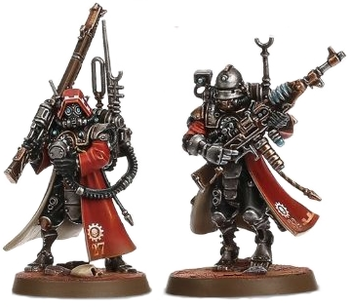 L, R: A Skitarii Ranger and a Skitarii Vanguard.
As the Omnissiah-blessed weapons shall serve you, so shall you serve them. Guard them well from the shame of defeat
—Excerpt from the Battle Benediction of the Omnissiah

The Skitarii, sometime known as the Tech-Guard in Low Gothic, are the rank-and-file military of the Adeptus Mechanicus. Each Forge World maintains legions, or Macrolades, of these cybernetically enhanced warriors that protect the holdings of the Mechanicus and prosecute their wars. Largely still human, the Skitarii are fanatically devoted to their Tech-Priest masters who largely view these warriors as disposable puppets. 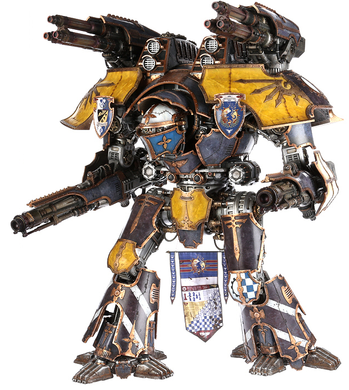 A Mars pattern Warlord Titan of the Legio Gryphonicus.
The Ground trembled every other heart beat ... the sound echoed louder with each beat, and haunted your soul as if doom was approaching ... and then I saw it towering in the sky, still miles away. The fear and awe one felt was indescribable. I can only image the sheer terror our enemy felt when they beheld the sight of the Emperor Titan.
— excerpt from the memoirs of Precept Catotus, Griffins Titan Legion

The most powerful land-based weapons of war created by mankind, Titans are considered to be the greatest embodiment of the might and fury of the Omnissiah in existence. These mighty god-machines are commanded by a Princeps, whose mind is linked directly with the machine spirit of the Titan, assisted by Moderati (who operate the weapons and other critical systems), Enginseers and numerous clades of Servitors.

Due to their size, the god-machines of the Titan Legions were mostly consigned to the background material, and the 6mm-scale Epic game systems such as Adeptus Titanicus, Space Marine and Epic 40,000. Advances in casting technology eventually made Warhammer 40,000 scale models more viable and Games Workshop’s Forge World department produce a range of Titans. The 8th Edition rules for using Imperial Titans in Warhammer 40,000 can be found in the Imperial Armour – Index: Forces of the Astra Militarum book. Adeptus Titanicus: Horus Heresy, an updated small-scale Gaiden Game similar to Epic, that focuses on Titan vs. Titan combat was released in August 2018.

NOTE: While Imperial Knights can be considered a type of Titan, they are not covered here due to being semi-independent organisations, with close ties to the Titan Legions, that have their own unique origins, organisation and equipment. For tropes relating to them, see Current Imperial Factions.

Devoted Followers of the Omnissiah 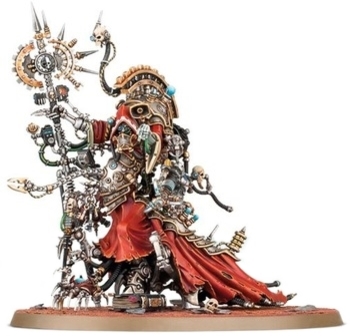 The Omnissiah filled the Galaxy with mysteries so that we might learn from them, coming step by step closer to his perfect being. To ignore them, even in the face of war, is heresy.

An ancient Archmagos from Mars, Belisarius Cawl is an eccentric genius whose skills and innovations (particularly the Primaris Marines he developed on the orders of Lord Commander Guilliman) have proven invaluable to the Imperium since Abaddon launched his 13th Black Crusade. While Cawl's refusal to be bound by many of the traditions of the Adeptus Mechanicus has led some to believe that his actions border on the heretekal, the Archmagos nonetheless holds the title of Dominatus Dominus (Master of Masters), one of the highest and most honoured ranks a Tech-Priest can receive. Despite his rank, Cawl has no qualms about personally leading Maniples of Skitarii into battle.

Thus do we invoke the Machine God.
Thus do we make whole that which was sundered.