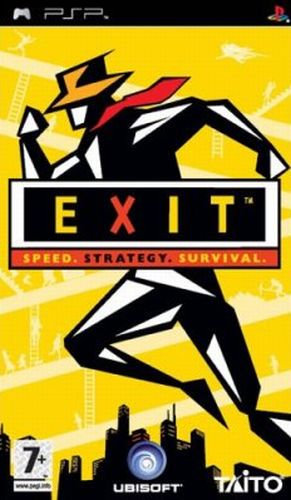 "Somebody help me!"
Many, many ladies in Exit.

Exit is a puzzle game with some platforming elements published by Taito for the Playstation Portable. You assume the role of Mr. ESC, described in the game as an Escapologist note yes, it's a real word, look it up who makes a living saving people trapped in apartment buildings, offices, hospitals, etc. The main goal of the game is to get out along with any trapped victims as fast as possible, a task made harder along the way as you will get hindered by earthquakes, floods, fires, electricity, and in some cases, meteor showers.

The puzzle part of the game comes in the form of creating safe paths to the exit for any victims you are saving, by pushing boxes out of the way, extinguishing fires, shutting off water pipes, etc. The twist being that the very same people you are saving can help you in such tasksnote children need help going up and getting down platforms but they can crawl through tunnels, adults aren't very agile but they can push large boxes on their own, and managing their respective strengths and shortcomings is key to gameplay.

The game got many mixed reviews with reviewers praising both its clever puzzles and the animated and colorful art style, thanks to its cartoony nature, but at the same time citing awkward controls and some trial and error gameplay on the later levels.

There's also a version of Exit for the DS that was released in Japan in January of 2008.

Not to be confused with the game show of the same name.