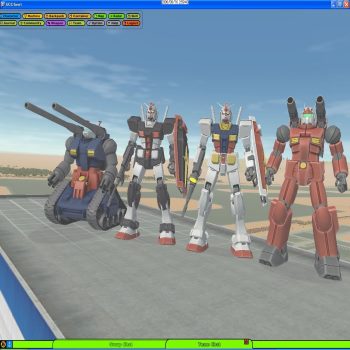 The Perfect Team.
Universal Century Gundam Online, or as it's frequently called, UCGO, is a MMO developed by Dimps.
Advertisement:

It was a short-lived MMO in which you could play as either a Federation or Zeon Soldier and fight in the One Year War. It was known for how very faithful it was to the Gundam series. You can pilot just about every major MS from the One Year War, equip a variety of weapons and shields, mine ores, fight in warfare, and even craft your own Mobile Suits and weapons.

The game was unfortunately cancelled in 2007, however there still is hosting for the game, so if you'd like to check it out, head to the main site.

Also, there is an current WIP mod for the game known as "Project Icarus", which is going to add a whole bunch of new features the game, even Mobile Suits from Zeta Gundam! You can check it out here.

The mod is currently in Alpha stages, and soon they will be allowing testing for it.

Now, onto the examples!