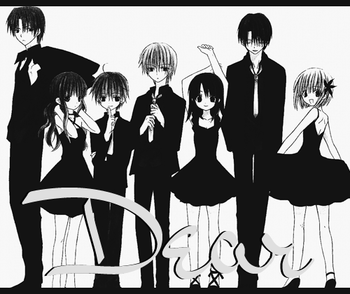 Komomo, a level 0 hero, has taken up a life of adventure, hoping to earn enough money to eventually fulfill her dream of buying a house. Unfortunately, she's too poor to take the level-up qualification exam, so she's stuck with "quests" which are really basically community service projects. Hoping to change her lot, she enters the castle of the demon-lord. She charges him with her sword raised... and he sweeps her into a hug, asking why she doesn't come to visit him more often. Turns out the Big Bad is a Bishōnen named Subaru who's more interested in sitting under the kotatsu watching television and glomping on Komomo than trying to take over the world, much to the consternation of his mooks. When they gather together and demand that he ban her from the castle, he agrees... and resigns his post so he can go with her. Thus, Komomo sets out into the world with her "level 2000" definitely-not-her-boyfriend, who is effectively her Disc-One Nuke since he can instantly vaporize anything that threatens her. (Which annoys her, she doesn't want to twink).

The series started out as a short-run gag manga consisting of a mash-up of Shoujo romance and every single video game RPG cliché you've ever seen, but proved popular enough to spawn a second volume, telling the tale of Purino, one of Subaru's chief lieutenants, a very clumsy girl who sets out to find him hoping he can cure her oncoming lycanthropy. Afterwards transitioning into...

The sequel series begins with a young girl Chiruha who also turns out to be the last surviving member of the lycanthrope race and her childhood friend Kisara, who has been Cursed with Awesome. They are later joined by the returning cast: Komomo, Subaru, Carol, Kurenai and Purino. A somewhat more serious twelve volume series, with longer story arcs and a little more work on the world being consistent and logical, though with plenty of gags thrown in, too.

Not to be confused with DearS.