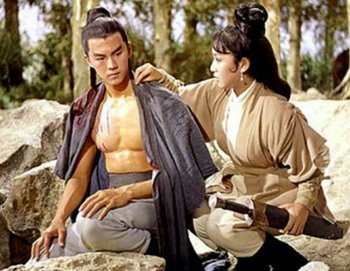 Ti Lung's first leading role, and he's got the abs to prove it.
Advertisement:

King Eagle is a 1971 Shaw Brothers film directed by Chang Cheh, and is notably Ti Lung's very first starring role, after all his earlier films are as extras or playing second fiddle to his best friend/frequent co-star, David Chiang.

When Chin-fu (Lung), the legendary King Eagle, saves a clan leader from an assassination attempt, he ends up being dragged into a clan war after both the clan leaders' daughters fell for him (the Shaw Brothers' resident "deadly doll" at the time, Li Ching, notably plays both sisters).