Video Game / Among Us 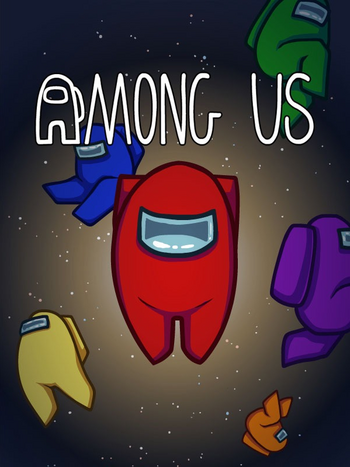 There is an Impostor among us.
"Join your crewmates in a multiplayer game of teamwork and betrayal!"
— Google Play store description
Advertisement:

Among Us is a multiplayer game published by InnerSloth with production assistance by PuffballsUnited, creator of the Henry Stickmin Series. It is, in essence, the social deduction games Mafia and Werewolf (1997) translated into a video game. Up to fifteen players have the role of the crew of a spaceship or facility, and must finish tasks for maintenance. However, up to three of them are Impostors, whose objective is to kill enough Crewmates for victory.

The game has four Three-Quarters View maps: The Skeld (a spaceship flying through space), MIRA HQ (the top floor of a high-rise building), Polus (a research facility on a cold planet), and the Airship (a recreation of the Toppat Airship from the Henry Stickmin games).

In each map, the Crewmates are each given a set of tasks to perform across the map; they do not know who their allies are. Dead Crewmates become ghosts, and can still contribute to their victory condition by finishing all their tasks. Impostors know who the other Impostors are and can sabotage vital systems to draw the Crewmates away from their tasks, temporarily lock doors to restrict movement, and use vents to slink about quickly. They also become ghosts if they're voted off, and can still cause sabotages. Each player can start a meeting to discuss the Impostor's identity by reporting any dead bodies they find, or by initiating an emergency meeting, although the latter only has a limited number of tries per player depending on the rules.

The game ends in victory for Crewmates if all tasks are completed or all Impostors are voted off, while Impostors win if surviving Crewmates no longer outnumber surviving Impostorsnote making voting off the remaining Impostors impossible or vital systems fail through their sabotage.

To facilitate the game's atmosphere, players are expected to not communicate except during a meeting. Dead players are also not permitted to speak at all until the game ends, though they share a text chat visible only to other dead players.

The game was first released on June 15, 2018, and it slowly but steadily nurtured a small, dedicated fanbase. It exploded in popularity on Twitch and other streaming platforms in mid-2020, fueled by the worldwide desire for socialization during the COVID-19 Pandemic, basically becoming the new Fortnite in terms of popularity. In August 2020, it was announced

on November 18th. A Nintendo Switch port of the game was announced on December 15, 2020, and released later that same day. It also made its way to the current Xbox and PlayStation consoles almost exactly a year later on December 14, 2021.

A major update was released on November 9, 2021, adding four new roles (Engineer, Guardian Angel, Scientist, and Shapeshifter), the ability to gain experience points, and tons of cosmetic options for the game and characters.

Compare with Werewolf (1997) and its variations, as well as Trouble in Terrorist Town and Town of Salem, all having a similar premise of identifying and executing undercover killers, and Project Winter, an online multiplayer with Survivors trying to escape a snowy wilderness and Traitors that try to impede their progress.

A common way of dealing with impostors and sus people in general.

A common way of dealing with impostors and sus people in general.