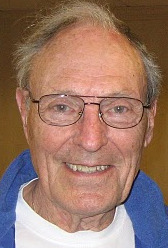 John Keston, (born Francis Douglas Arthur Caston, 5 December 1924- 13 February 2022) was a world-record-holding runner as well as a Shakespearian scholar, having worked with the Royal Shakespeare Company

on tours. He also wrote, produced and performed a one-man show, "Expressions of Aging", reflecting his love of history, acting, music, and the English language centered around the theme of growing old.

He has another son, Richard, and three sons from a previous marriage: Philip, Michael and Tony. A long version of his biography can be found here

John Keston, stole the show in a manner of speaking, in the video-game Riven: The Sequel to Myst as the primary villain Gehn. For tropes about his character Gehn, see Myst Characters page.

He passed away at age 97 due to complications from COVID-19.