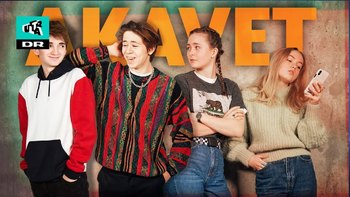 From left to right: Aske, Elias, Alma, and Tone.
Advertisement:

Akavet (en. "Awkward") is a Danish youth series that has been produced for the national broadcaster DR and airs online on their Ultra subsidiary.

It features an Ensemble Cast of the 14-year-old twins Alma and Aske and their respective best friends Tone and Elias. As a Slice of Life series, it focuses on all the typical embarrassing and - as the title may imply - awkward episodes that a typical teenager will have to endure during early adolescence, usually told from a comedic point of view.