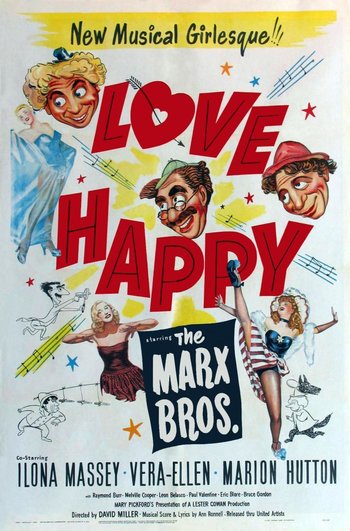 The final movie featuring The Marx Brothers, released in 1949.

In keeping with their format since the MGM days, the movie revolves around the Marxes helping a young couple, Mike Johnson and Maggie Philips, in their attempt to get their debut Broadway show up and running. Harpo gets himself caught up with the villainous Madame Egelichi, who has been after the famous Romanov family diamonds for some time. Also after the diamonds (and Madame Egelichi) is private investigator Sam Grunion, played by Groucho. Harpo happens upon the diamonds, which unwittingly end up in the Broadway show. Hilarity Ensues.

The movie plot was essentially thought up by Harpo himself, who later claimed it was intended as a way to help Chico pay off gambling debts. It is unique in that the brothers themselves seldom share scenes: Harpo gets the lion's share of the plot, followed by Chico in a supporting role and then Groucho rounds out with occasional scenes. One of these scenes famously introduces Marilyn Monroe in one of her first roles.