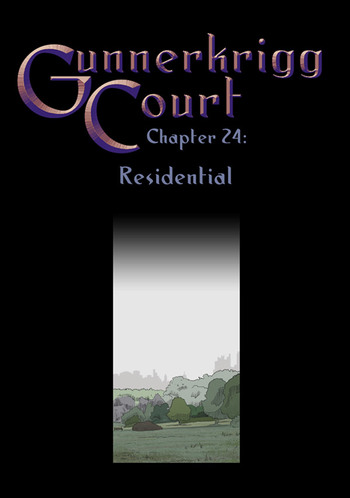 Time for the school camping trip.
Annie and Renard are talking in the ether, and Rey says that Annie didn't have to leave her blinker stone. She responds that she's just checking in on him in case he gets up to mischief, and Rey laughs and tells her to have fun with her friends. As Annie comes back to herself onboard a train, Kat asks her if she was talking to Rey. Kat still can't believe that the park they will be camping in is in the Court, and she's not looking forward to it because of bad weather, hoping they can stay indoors. The students disembark, wearing raincoats, at Young's Park, where they are greeted by the Court gardener, Bob, and his wife Marcia, who lead the kids to their campsite while riding a quad bike.

After a long, dreary walk, they arrive at the campsite, where they are greeted by Mr. Eglamore. Kat instantly perks up, thinking that the trip won't be so bad after all. Eglamore indicates a direction and tells the students their tents are set up over there. As the students search for their tents in the fog, Eglamore gathers up the wood he was chopping and heads off, telling them they'll need to do a little more walking. While searching, Paz discovers "COWS!", only to be disappointed on finding out they are robots. The Laser Cows, as Bob explains, cut the grass in the park.

After everyone finally arrives at the tents, Eglamore tells the students to pick tents and drop their stuff off, and then they'll go on a tour of the park. As Annie and Kat choose a tent, Annie sees Jack watching her, before she turns away. Later, Kat ressures Annie that they knew Jack's class would be there, and she finds it unlikely that anyone will try anything, especially with her around to protect Annie, who feels safer already. Kat then observes that the park is rather boring, and asks Annie if Gillitie Forest is anything like this. Annie describes the Forest as being much more wild, unlike the park, which is mostly neat – except for a messy patch of greenery that she points out. Kat clears away some of the plants to reveal a monument to Sir Young and "Nevihta", who Eglamore reveals was Young's Orjak. He notes that the cows never cut the grass around the monument, so he stops by to tidy it up from time to time.

When Eglamore introduces the two girls to Bob, the gardener mentions that he first met the two of them in one of his decon habitats. Annie asks what the rooms are for, and Bob explains that they usually hold samples from the Forest. Since the Forest dwellers use magic on the trees, samples are planted in the chambers to be studied and to make sure any links to the Forest are broken. After that, the samples are moved to the park, where Bob and Marcia look after them. Bob points out a bush that used to be one of the Forest's bound dogs, and Eglamore draws Annie and Kat's attention to a familiar-looking tree, grown from the wooden arm that Robot received on his trip to the Forest.

Later that night, as everyone heads off to bed, Kat is envious that Eglamore is staying at Bob and Marcia's house instead of sleeping in a cold tent like the students. Eglamore describes it as part of the experience, admits that he hates camping because it makes his back hurt, and assures the students that the Laser Cows will keep an eye on things. Winsbury demands to know why they couldn't have gone camping when the weather was nicer, which Eglamore describes as a good question as he leaves. Later, Winsbury's attempt to start a fire is extinguished by a Laser Cow, prompting this exchange:

Winsbury: Go away you big, dumb cow!
Laser Cow 1: Response: No. Added Note: It is you that is dumb.
Laser Cow 2: Query: Did I detect some burning just now?
Laser Cow 1: Reply: Only my incredible insult.

Kat, watching, tells Annie that some of the guys are trying to start a fire. Annie walks over to the fire pit with her blinker stone and starts a fire, which she makes undetectable to the cows and safe to touch. She's uncomfortable when the others thank her, and walks off into the woods. The next morning, Eglamore arrives early to wake the students up. Annie and Kat find that their backs hurt after a night in their tent, and Kat concludes that camping was designed as a punishment. Annie discovers that her blinker stone isn't where she left it last night, and, sensing for it, finds that Jack has it. While she's in the ether reclaiming her stone, Jack senses her presence, and she sees that he has a spider on his face. She tells Kat she doesn't want her going near Jack.

Later that day, doing archery, Winsbury and Janet are the last archers standing to determine the winner. Instead of hitting the target, Janet's arrow pins Winsbury's to a tree. Eglamore compliments her, but notes that she missed the target. Janet says it's a shame, as she and Winsbury secretly hold hands. Suddenly, Bob and Marcia drive up – there's been an emergency at the Court. Eglamore and Bob have to leave immediately, leaving Marcia to supervise the students, something she's unsure of, because of the ghost. Some of the students overhear what Marcia said, but just after Eglamore and Bob leave, Marcia sees the arrow stuck in the tree and gets very angry, ordering the students back to their tents and Janet to clean up the archery equipment by herself.

Later that evening, Winsbury is worried because Janet hasn't returned to the camp. When he and Kat go to the Suttons' house to report the disappearance, Marcia is rather callous, claiming that she knew this would happen because Eglamore isn't there to protect the students from the ghost anymore. She tells them to not wander around on their own and go back to their tents to wait for it to blow over, before slamming the door. Later on, while talking, Annie and Kat discover Jack next to a fallen Laser Cow, and they demand to know what he's doing. He reveals he's simply removing a rock from one of the robot's joints, and she thanks Jack before leaving. Kat confronts Jack about him trying to steal Annie's blinker stone, and he says that making it disappear was a nice trick before claiming that Annie's Emotionless Girl status is why he didn't just ask her about it. Kat is angry, but Annie tells her they should go. Jack insists that Kat and Annie don't have any friends because of this, insinuating that they're creepier than him, and Annie forces an enraged Kat to leave.

That night, in their tent, Kat is still angry about Jack's rudeness, and Annie tells her that she shouldn't be lonely just because they are friends. Kat retorts that Jack was just trying to mess with Annie's head, when John comes by. He asks Kat if she could ask Annie to make another fire, and when Kat tells him that he should ask Annie himself, John is suddenly nervous. Annie hands him her blinker stone, telling him to put it on the ground and she'll light it. As John walks back to the other students, Annie says that it does seem to be true that the others don't like talking to her, speculating that she makes people nervous. Kat responds that Annie is just quiet, and Annie says she doesn't see that as an excuse for Kat to feel she can't do stuff with other students. The two head for the fire. Shortly after, Paz, talking with Matt, leaves the fire to get something from her tent, only to be grabbed from behind by a shadowy figure.

The next morning, Matt and Winsbury, talking about Paz's disappearance, note that that makes six people who disappeared in the night, counting all of the camps. Annie, walking up, announces that she believes the teachers are playing a trick on them, speculating that Mr. Eglamore is doing the abducting. Winsbury agrees with the theory, noting that it's the kind of trick adults would play to make the camping trip more exciting. Annie proposes that they set a trap: having the next abductee carry her blinker stone, as she'll be able to see where they go. Kat immediately volunteers. Later, as she sits by herself under a tree, the kidnapping does happen – but not the way she expected, as the tree itself comes to life. Annie hears Kat scream, and immediately finds the stone's location in the ether, along with Kat and the missing students, in a room with a tree in it. She sends Kat instructions through the blinker stone.

Matt runs up to the house and bangs on the door, telling Marcia that Annie accidentally set the trees on fire while she was trying to draw out the ghost. When Marcia, furious, is told this was near Young's monument, she runs out of the house to see the fire and immediately contacts her husband and Eglamore to report that they have a problem. When the Suttons and Eglamore reach the fire, as Eglamore exclaims that he knew letting Annie have the blinker stone would be too dangerous, the fire pulls away from Young's monument to reveal Annie sitting atop it. She douses the illusory flames, and reveals that she guessed that Marcia was a dryad. Marcia confirms it, revealing that she has the power to control and travel through the trees themselves, which Annie had figured out was how she could abduct some students so easily. Eglamore admits that they would have had all of the students in the dorms at the house eventually, but they figured it out sooner than the teachers had planned. Bob asks Annie why they were made to come all the way over to the monument, and Annie reveals the "fire" was a distraction so the students could take over their house. Marcia immediately attempts to travel into the house, but discovers that Kat and the others, on Annie's instructions, covered up the tree there.

Arriving back at the house, Annie walks past a line of laser cows standing around it. The cows are accompanied by Jack, who tells the teachers to stop before he has the cows create a laser grid around the house to keep the teachers out. Winsbury begrudgingly thanks the cows. Annie tells the teachers where the tents are before bidding them good night. Bob observes that there's a lesson in all of this:

"Never let sixty angry kids use a herd of laser cows to take over your house."