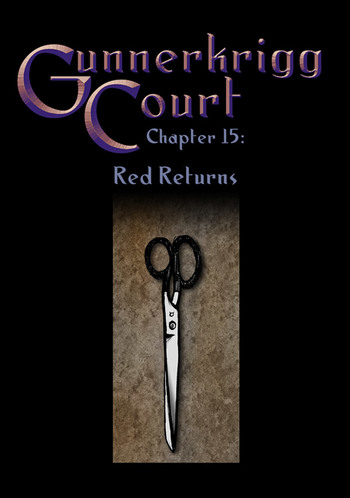 Annie's spent the summer alone at the Court save for Shadow 2, Robot and Reynardine. Over the summer, she noticed similarities between the Court and Good Hope Hospital, where she used to live. She also moved into the Year 8 girls' dorms before anyone else. The dorms are located in buildings on struts inside of a much larger building, and the walls and ceiling can't be seen. Kat, back from holidays, bursts in with a mispronounced "Buongiorno!", and Annie is so happy to see her best friend again that she cries. Kat got Annie a present: a Venetian mask on a stick. Kat got herself one too and, of course, it looks like a bird. Annie has a present for Kat, as well: a jar of tiny paper stars. It took her six weeks to make them. Annie's dad didn't call, and Kat says she has no intention of leaving Annie alone again. Shadow 2 can speak much better, as he and Annie have been practicing. He and Robot are now best friends. Rey, meanwhile, is currently in the "naughty zone", and thus can't talk. Kat is amused.

Later, while leaving the assembly welcoming them to the start of another year, talking about how boring it was, Annie and Kat are accosted by a red-haired girl who bellows "IT'S YOU!" at Annie. It's Red, the former fairy from the river, and she's not happy. She thinks she's "fat", and pulls up her shirt and sweater to show this, leading Annie to tell her to stop. Red also finds her new face "stupid". The thing she is most aggrieved about, however, is that her hair won't stick up anymore, and now she's alone because of it. Blue won't even be her friend anymore. Annie suggests that if Red would just calm down, maybe she could get Blue to be her friend. Red is insistent that her hair is the reason for her friend's abandonment. Annie then suggests that Red could get a haircut, to which Red reacts with astonishment — she didn't know that you could cut hair. Annie and Kat offer to take Red to the hairdresser.

The three of them head down to the Court subway system. Once onboard, Annie comments on the quietness of the trains, and Red says that's because they're maglevs. Annie asks Red how she's been, and she says she's been "junk!" She doesn't enjoy her classes at all. Neither can she describe what a chair is. Kat asks the obvious question: how can she describe magnetic levitation when she doesn't know what a chair is? Red says she only knows what they tell her.

Upon being asked if there are lots of ex-fairies as students, Red says it's only the girls of Foley House. The boys used to be lots of different things — one of them was even a fish. Kat asks why Red is in uniform, since classes don't start until tomorrow. Red says they always wear them, since school didn't finish for the Foley kids. Annie and Kat are surprised the Foley kids don't get a summer vacation.

While bicycling down a street, Annie asks Red when she and Blue passed their test. She says it was right after Annie left, because Ysengrin was down by the riverbank, checking out the mechanical bird. Kat is surprised, because she knows Annie told her Ysengrin didn't find the bird until months after that. Annie knows this, too, and asks Red if she's sure she saw it. Red's sure — she even saw Ysengrin burying it.

The girls are now riding in a carriage drawn by a mechanical horse. Annie says this information means Ysengrin was lying. Kat remarks that he doesn't sound very trustworthy. Annie asks Red if she knows much about him, and she says no, because those who take the test to become human live apart from the rest of the forest.

The girls arrive at the hairdresser. Kat goes first, and Red's astonished that it didn't hurt. Annie and Kat manage to prevent Red from cutting off her own finger in the mistaken belief that you can cut anything off a human's body and it'll grow back just fine. The hairdresser robot asks Red what she wants, and she says she just wants it to stick up. So that's what the robot gives her. Red is pleased, and runs off to make friends with Blue again. Kat tells Annie that one of them is going to have to tell Red that she's going to need a can of mousse daily to keep her hair that way.

Annie goes to see Blue, but she doesn't want to see Red. Kat tells Red she can't expect Blue to be her friend again because she changed her hair, but Red is adamant. She also reveals in the process that she doesn't even know Blue's name, to Kat's shock. When Red enters the room where Blue is, she's proven right, as Blue immediately wants to be Red's friend again because her hair sticks up. Red laughs at Annie and Kat, and the ex-fairies take off.