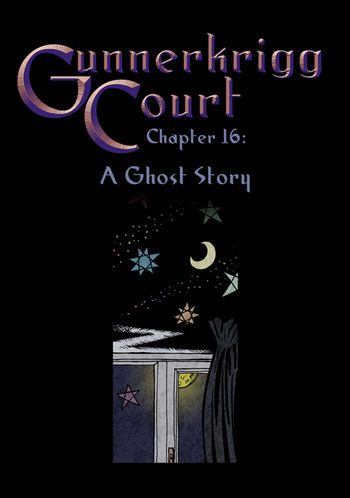 Time to get spooky.

A spider catches a fly in its web, in the tree that Annie sits beneath, reading. She looks up and greets an unseen figure called Ketrak. Kat, walking on the grass, sees Annie apparently talking to thin air and comes over to ask who she's talking to. It turns out that Ketrak is one of the Guides, specifically the one for insects. He's there to collect the spirit of the fly. Annie asks Kat if she wants to see him, and Kat soon regrets having said yes — apparently Ketrak looks pretty horrifying. He leaves, and Kat wants new eyes.

Kat asks Annie what it's like talking to the Guides, since she doesn't mention it much. Annie says they stop by occasionally, and usually it's Ketrak since something has to die nearby. She's used to their presence, has been since she met Muut in Good Hope Hospital as a child.

She told him she liked his face, and he told her he knew her mother, and took her on his visit. Annie tells Kat she didn't know for years what they were for. She just thought they were visiting friends. Kat, recalling that Annie told her Muut has an owl head and no shirt, likes the idea. She asks if that's all Annie did with the Guides, visiting people. Annie tells her that occasionally there was more, and tells her of something that happened one night shortly after she met Muut.

Young Annie wakes up one night to hear her mother talking to someone. Two Guides want Annie to help them with something, and Surma is reluctant to allow it, but eventually she does. She asks Annie to come over, and introduces her to them: Mallt-y-Nos, a woman wearing a hood and carrying a staff, and the Moddey Dhoo, a large black dog with glowing red eyes. Surma tells Annie that they're having a dispute, and need someone to help them settle it. She asks Annie if she wants to help. When Annie says yes, Surma tells her to remember one thing . . .

The two Guides appreciate Annie's help, and tell her time is running out. There is a child lost in the hospital, and he needs to choose between one of the Guides. His family was taken in an accident, but he didn't go right away and was taken to the hospital, and now he's stuck. Mallt-y-Nos explains that the boy's father went with her, and the boy's mother and sister went with the Moddey Dhoo, so by all rights the boy should go with her. The Moddey Dhoo gives her a nip in retaliation for the comment, and explains that the boy is allowed to make a choice as he was born between two jurisdictions. Annie interrupts his talk by playing with his tail. Mallt-y-Nos complains that she's too young, but Annie insists she wants to help, so the hag tells her to pay attention as they've arrived. The Moddey Dhoo gives her a warning: the boy doesn't know he's passed on.

Annie enters the storeroom to find it looking mostly normal, except for the corner, where part of a different room, with a bed and a window, are present. Annie approaches to find the boy hiding under the bed. He tells her to hide because there's "a scary witch and a big dog outside my room!" He's terrified of the Guides, but Annie tells him not to worry as it's just Mathilda and Dhoo, who want to help, as does she. She touches the boy's arm, and it changes, to look burned. He freaks out, and Annie says she has no idea what happened. He retreats farther under the bed to get away from her, and she follows, but he's gone. She comes out to find him standing by the bed, and he asks her if she wants to "see something cool" — a lizard. Annie doesn't like it, and then the lizard opens its mouth, revealing many teeth, and bites the boy's hand. He shakes it loose, flinging it onto the floor — and the lizard begins to grow, spreading out along the floor and consuming the walls of the room.

Once it's covered the entire room, the lizard's mouth opens again, and a screeching sound comes out. Annie cries for the sound to stop, and the boy freaks out because his parents are going to be very angry. Annie doesn't know what to do, but then she notices that the lizard-stuff won't come anywhere near her, and that the screeching sounds like an alarm — and she looks again, and the room is ablaze. The boy was playing with fire, and the noise is a fire alarm. The fire-lizard approaches the boy, and Annie yells "NO!" She doesn't know what to do, and then she remembers what her mother told her. She walks through the fire, and hugs the boy, and the fire and the room vanish. The boy asks what he did, and Annie tells him it was something bad, but he didn't mean to, it was an accident. He asks where his family is, and Annie tells him they're with her friends. She opens the door to reveal the two waiting Guides. Mallt-y-Nos tells her "well done", and the Moddey Dhoo tells the boy, named Martin, that what's done is done and he must now choose which one of them will take him to the Aether. Annie tells him it's okay, and he chooses to go with Mallt-y-Nos.

Kat, back in the present, is saddened by the story. She sees it as unfair, and Annie tells her something Dhoo told her after he brought her back to her mother:

"The world continues to spin, pup. The boy and his family will ensure it."

Kat asks what it means, and Annie says she's not sure either, except maybe as consolation, or implying another plane of existence, like the Aether. Kat says it reminds her of the ghost by the Annan Waters, and says that if Annie's friends couldn't help her, maybe she's stuck too. Annie says it means the ghost may not even know why she's down there, and Kat says she's probably been there a long time. Annie says she should have tried to help her, and Kat points out that the ghost tried to stab her.

There's one more thing, though: What did Surma tell Annie? How did Annie know the fire wouldn't hurt?

Surma: Always remember . . . remember I will never send you into danger.