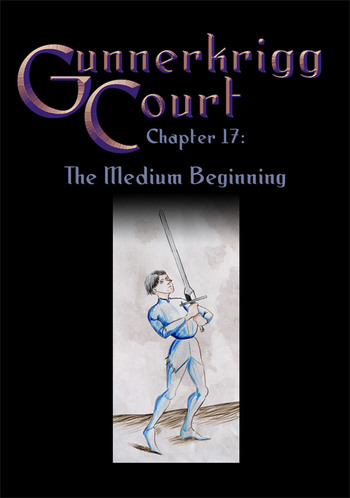 The arts of the medium and the art of the sword.

Annie and Kat are in physics class, and Kat is geeking out over a double-slit experiment. Kat heads off for the practical, encouraging Annie to hurry up so she doesn't miss it. Annie says she'll be along in a moment, which gives her time to copy Kat's answers. Annie is distracted from her cheating by Ms. Jones entering the classroom, to the buzz of several students wondering who she is. Jones is there to pull Annie out of class, and Annie tells Kat not to get too bored without her.

In the hall, Jones asks Annie if she's given any thought to the headmaster's offer, and Annie says that she has and it sounds interesting. Jones says in that case they will begin today. Annie asks her if that's what she does, teach how to become a medium, and Jones answers "Currently, among other things." Jones asks Annie what Coyote told her before he left, and Annie reveals that he invited her to visit him in the forest. Jones says that in that case she should take him up on the offer. Annie responds that Coyote also said she shouldn't trust anyone in the Court, which Jones remarks sounds like something he would say. Annie asks if it was a lie, and Jones responds:

"Coyote is no liar. Therein lies the danger. Just be careful how you handle his advice."

Jones tells Annie that her mother was the last medium employed by the Court, and the last member of the Court allowed into Gillitie Wood. Annie remarks that she never knew her mother worked at the Court at all, and Jones says that was probably her father's influence. She then remarks that she's heard that he's disappeared without a trace, abandoning Annie. Jones doesn't find this surprising, considering how devoid of emotion he was. Annie, at this point, asks Jones if she's trying to make her angry. Jones readily admits it, stating it helps her assess Annie's character.

Jones and Annie arrive at a gym where Mr. Eglamore is teaching a swordfighting class, Parley being one of the students. Jones approaches Eglamore and Parley to say hi, while Annie sits in a chair by the wall. Jones then goes back to Annie and tells her since the lesson is almost over, they will sit and watch. Annie is surprised the Court taught swordfighting to the students. Jones says it instills a sense of self-awareness and how to read body language, and that it's a good way to read someone's character. Parley is skilled at Liechtenauer, because it's a good fit to her personality.

Annie tells Jones that she's noticed that for such a science-focused school as Gunnerkrigg Court, there's an odd duality between the subjects taught to the students and the events that happen around them.

Jones: For a school of science, there is much that science does not explain.
Annie: Exactly.

Jones points out the alchemical symbol for bismuth seen in a stained glass window, a frequent sight in the Court. She tells Annie that it serves as a reminder that the Court was founded on a union between technological and etheric design. When Annie asks what "etheric design" means, Jones tells her it is processes that science cannot explain. Now, time for a history lesson from Jones:

"The Court first took root in what was once the heart of Gillitie Wood. A group of humans were offered refuge by the creatures of the forest, and they worked together to create a place where they could live in peace. But man's lust for explanation saw him grow tired of etherial tenet. So concerned were they with the workings of the universe, some of the humans were driven to question their very surroundings. There was a great division which saw the Court and the Wood separated. Nature on one side, technology on the other. And this is where you come in, or people like you. Usually, individuals who can remain unbiased and objective are chosen as mediums. In the interests of diplomacy they undertake a negotiative role when the need arises."

Annie asks why, if the Court has had no medium since her mother left, there are now three candidates. Jones explains that there hadn't been any dialogue with the forest for a long time, until recently, so they hadn't searched for one. Annie finds the coincidence suspicious. Meanwhile, Parley is winning her fencing match. Annie tells Jones she's noticed that Jones never uses "we" or "us" when talking about the Court and the Wood, as if she doesn't ally with either side. Jones responds that it is a keen observation, but irrelevant. The bell rings, and swordfighting class ends.

Jones asks Eglamore if he's been growing his hair out, in an oddly intimate moment. When Annie walks over, Parley suggests that Eglamore and Jones spar, since Annie's never seen them do so. Eglamore says that wouldn't be fair.

Annie: Because she is a woman?
Eglamore: Haha! No, because indoors, and at close range, Jones would flatten me.

Jones says it wouldn't be a real match, and they can make it quick, so now Eglamore has no excuse not to spar. Annie asks Parley if Jones needs a sword, and Parley tells her Jones never uses them. Smitty arrives just in time to see the match, which starts off with Eglamore's sword bouncing off Jones' face, and is swiftly concluded with Jones disarming Eglamore and pointing the sword at him. She then suggests that his mind is elsewhere, and tells him he needs to watch his step with Annie. Annie, meanwhile, is puzzling over the match in her head, particularly Jones' invulnerability. Parley heads off to change.

At medium lessons, Jones tells Annie that most of the students have extra normal abilities, and that some of these skills lend themselves to being a medium. Annie has a special empathy with etheric beings. Parley pulls a deck of cards out of her bag to demonstrate Smitty's ability — when he tosses them over his shoulder, they land in a perfect stack, in order. Parley, on the other hand, doesn't yet know what her talent is. Oh and she has an Embarrassing First Name: George. Thanks to her father, also a psychic, who pre-ordered her birth certificate and got everything right but the gender.

The trio share their thoughts on the meeting with Coyote. Parley notes that Ysengrin clearly hates the Court. Smitty notes that Coyote seemed pleased to see the demon, Renard, and wonders if the meeting was a ploy to get to him. Annie notes that the headmaster didn't seem to be taking the meeting seriously, and was very rude. Jones states that both sides are equally bad, the Wood posturing and baring their teeth as animals do to show dominance, and the Court seeing the Wood as little more than stupid animals making a disturbance. So she has arranged a meeting with an etheric being: Mort.

Parley is amazed to meet a ghost, and attempts to communicate with him by putting her hands to her temples. Mort asks Annie why she's doing that, and Annie says she doesn't know. Jones is surprised that Annie knows Mort, and she introduces him to everyone else. Mort and Smitty shake hands, but when he says hello to Parley he feels the need to mock her for her display earlier.

Mort talks about what he does, and how Annie helped him with scaring people by teaching him to be more subtle, which he demonstrates by placing a spider on Parley's shoulder. The conversation goes great.

Some time later, the students leave, saying goodbye to Mort. He shakes hands with Smitty, makes a big shebang with Parley, and can't wait to see Annie and Kat again soon. Parley hauls Smitty off for some food. Jones compliments Annie on a lesson well done, and asks her to let her know when she wants to go to the forest. Jones will teach Annie, but she will not make her decisions for her.