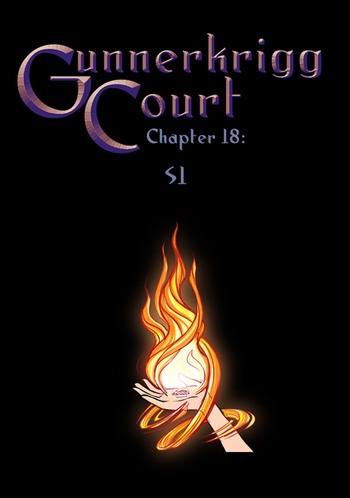 "It behaves that way because she wills it so."

It's Kat's first day of school at the Court, and no one wants to be her friend because both her parents are teachers.

Back to the present, Kat and Annie burst in on Mr. and Mrs. Donlan in a moment of intimacy, although they don't realize they interrupted anything. Kat wants to know if her parents know anyplace in the Court she could use as a workshop, because she wants to build a robot. As it happens, they do: Anja gives Kat the key to her old unit down by the west canals, which is empty and has plenty of space. But the Donlans are secretly concerned, but decide to let the girls find out the secret on their own, as their time has passed.

Kat reminisces that she's known Eglamore her whole life, that he was "Uncle Jimmy" before he was "Mr. Eglamore". Annie finds this somewhat amusing. Kat's packing a box of stuff in her room. Annie asks if Eglamore has ever mentioned a woman, and Kat responds in the negative as she tosses an MP3 player to Annie. Annie thinks there might be something going on between Eglamore and Jones, and Kat hopes there isn't because she'd have to beat Jones up otherwise. Annie tells her she'd probably have some trouble, because she thinks Jones is a robot. Kat is skeptical, in part because she thinks it's impossible to make an android that looks that good.

Another flashback: Kat gets an A* on an assignment, and when she's persuaded to show it to the other students, they're jealous because they think her parents helped her, even though she really is just that smart.

Annie and Kat are discussing the human body as a biological machine on the way to the train station, when they are heckled by a trio of older students because Annie is carrying a "teddy bear" — Reynardine. Kat yells at them to shut up. Rey isn't happy, and is only too pleased when Annie suggests he could scare them away. He takes the form of a wolf and chases the hecklers off. Kat asks Annie if she's allowed to do that, and Annie responds that she sincerely doubts it. Rey comes back, triumphant, and Annie thanks him, saying she didn't even have to command him to do it. As Rey shifts back into stuffed toy form, he says that one is allowed to defend one's own honour. The train arrives.

At the unit, a clockwork mouse zooms up to Annie and Kat. It's Robot's current accommodations, sent to inspect the place. Shadow 2's already inside, as the place is fairly deserted like the rest of the Court. Kat is pleased by her new workshop. Shadow 2 calls everyone's attention to a locked trapdoor, which they don't have a key for. Annie asks Reynardine to pick the lock, instead of smashing it as he wanted. The decision to investigate the dark passage beneath is easy. They didn't bring flashlights, though, which is no problem as Annie has her blinker stone. Kat wants to know how it works, and Rey tells her it burns some things and not others because Annie wills it, which Kat doesn't find a good explanation.

At the bottom, they find a large room, with unplugged floodlights set up. Annie and Shadow 2 volunteer to go back up and plug them in. In the dark, Kat tells Reynardine she found his defence of Annie earlier rather cute. Rey denies that he defended Annie, and Kat laughs, "okay then, whatever you say." Rey suddenly takes wolf form and tells Kat she's a good friend to Annie, and asks how Annie's doing in her studies, if she has any other friends, if anyone's been giving her trouble and if she has a boyfriend. Kat asks where this is coming from. Rey claims he was only curious. Kat tells him he's much nicer as a wolf, and Rey tells her "Well, the mind is nothing but a plaything of the body, correct?" At which point, the floodlights come on.

Flashback: Kat comes home to find her mother crying in the kitchen. Anja claims she's okay, as she holds a student transfer form for Antimony Carver. She tells Kat there's a new student coming on Monday, and she should get to know her.

Annie hears a scream from the basement, and runs down to find Kat screaming in glee at a display of elaborate robots in the cave. There are all kinds of early models of common Court robots, including a Seraph, Robot's original model, holding a sword. Kat decides to have a look at what powers these robots.

Hours later, she's screaming in despair because she can't find anything. The old robots have no electronically powered parts of any kind, and Kat can't figure out how they would have worked. Annie suggests that they work through means Kat is unfamiliar with, and that maybe Kat should try Robot's CPU in one of them. Kat is skeptical, but tries it in one model. When it doesn't work, Annie suggests trying it in S1, the Seraph. Kat isn't expecting anything to happen, but the moment she does so, S1 comes to life, crying "JEANNE!" He runs across the chamber, to the girls' shock. Annie thinks there's something wrong with him. Robot-in-S1 takes a stance with his sword, and Annie asks him who Jeanne is. Robot responds, "She died and we did nothing."

A large robot emerges from a hole in the wall, and Rey yells at the girls to get back, pushing them away from S1. The large robot attacks Robot, who dodges effortlessly.

Robot-in-S1: You will pay for what you did to her. But you will never be forgotten.

The large robot attacks Robot-in-S1, and is driven back. S1 severs its limbs from its body as the girls watch in shock. Kat notes that it isn't a fair fight, and Rey agrees: it's scripted. "A morbid play acted out by these machines," which finishes with S1 decapitating the large robot, at which point all the other robots applaud. Robot-in-S1 bows to the audience, then turns to the large sealed doorway on the far side of the room. He cuts a hole to reveal a secret passage, which he enters. The girls, Rey and Shadow 2 follow, to find S1 kneeling in front of a portrait of a very familiar woman: Jeanne, the ghost of the Annan Waters.

Kat finds another, much smaller portrait of a man named Diego, who must have made the shrine. Rey, entering, dubs the room a "coward's shrine", made by someone who loved Jeanne from afar but could never admit it. He points out that it's unlikely Jeanne would ever have loved someone so unattractive. Rey also judges by Jeanne's body language in her portrait that she is uncomfortable in her finery, and clutches her sword for comfort, so she was probably a soldier. He posits that the entire underground area is a representation of a man who, despite his technological wonders, was unable to save the woman he desired, and points out that his creations all but admitted that the long-dead Diego was a coward. Kat defends Diego, pointing out that they know nothing, and that maybe Jeanne died from falling off the bridge. Annie wonders, if that was the case, why is she still down there? Shadow 2 speculates that maybe everything that dies down there stays down there, but Annie is skeptical.

Robot, back in his mouse body, remembers that he had such a hatred for the creature, and notes that Jeanne is beautiful. Kat asks Robot who looks after the Court robots when they break. Robot tells her they fix themselves, and Kat suggests that explains the difference between the elaborate older robots and the simpler newer ones, as the older models are so complex they couldn't fix themselves. Kat still can't figure out how the older ones are powered, and Reynardine suggests etheric means. Kat scoffs at that, and declares she'll figure it out eventually.

One last flashback: It's Annie's first day of class, and Kat decides to introduce herself.

And one snippet of farther in the past: Anja locks up her workshop, wishing she could get one of those robots to move. Surma tells her she'll figure it out. They discuss the robots, and their respective intellectual strengths. Both young women are also waiting for their men: Donny and Jim.