Film / Vengeance Is A Golden Blade 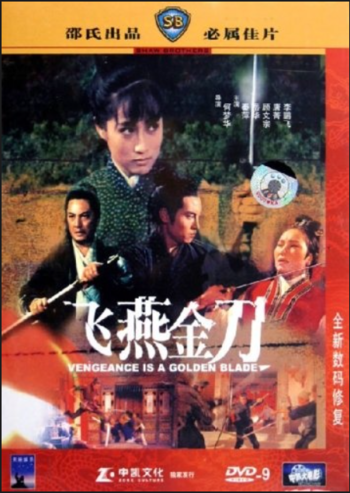 Vengeance Is a Golden Blade is a 1969 wuxia Martial Arts Movie released by Shaw Brothers, directed by Ho Meng-hua, the Shaws' go-to guy for high-bodycount wuxia epics (better known for his films like The Jade Raksha and The Lady Hermit). It stars Yueh Hua, Tang Ching and Chin Ping (a.k.a discount Cheng Pei-Pei) in the lead roles.

The once-happy family of a lawful martial arts clan leader, Chief Li Zhi-shan, is ripped apart when Li's unfaithful wife, having an affair with a ruthless bandit lord, Long Zhen-tian, conspires to have her own family slaughtered. Chief Li barely managed to escape the massacre thanks to his powerful family heirloom, the invincible sword called the Golden Blade; fleeing with his loyal servant and his young daughter, Li Xiao-yan, in tow, the Li family ends up taking refuge in the house of an old friend, the benevolent old Master Liu.

Eighteen years later, Chief Li's daughter, Li Xiao-yan (Chin Ping) had reached adulthood, and started developing feelings for Master Liu's grandson, Liu Qing-Song (Yueh Hua), both of them having trained under the same kung fu master as children. After the betrayal, Chief Li lied to his daughter that her mother had died in the hands of the bandits led by Long Zhen-tian. Swearing revenge, Li Xiao-yan and Liu Qing-Song decide to rid the martial world of evil, but complications ensues when Xiao-yan discover her mother is still alive.

Vengeance of the Golden Blade contains examples of: