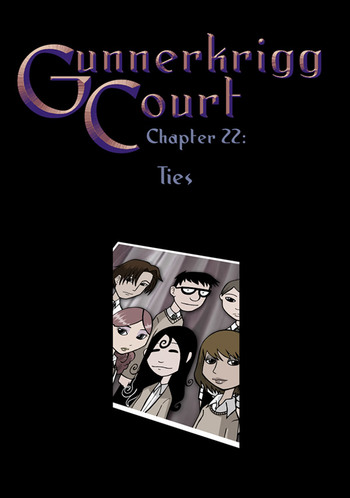 Time for a trip down memory lane ...

It's picture day at Gunnerkrigg Court, and six students have just had a group photo taken. The photographer tells them to be off, and put their names on the form, as he calls for the next group. Surma thinks she'll look stupid, that she had on her "serious face", because she always looks serious in photos. Anja says it's nice to have a picture of friends, and Brinnie tells her she means "picture of Donny", to Anja's embarrassment. Across the room, James is saying the same thing to Donny, only it's "picture of Anja" instead. Donny is also embarrassed, and James tells him not to worry about it. He does wish Jones could have been in the photo, but Donny says that Surma can't stand her. They ask Tony if he wants to come to lunch, but he has "matters to attend to." Donny says they'll see him later, and James wonders who talks like that.

Brinnie has to go, too, because the "old man" gets angry when she skips a lesson. She's not too thrilled, because she can't even eat lunch with them anymore, but what can she do? She asks them to tell her how the photo turns out, as she departs via a glowing, blue triangular portal. Some students, like the obnoxious Hyland, think that Brinnie's a "freak" for so doing, and they should have been left in Chester House with the other weirdos. Surma dares him to say it to her face. As Hyland attempts to do so, he is promptly decked by James. Shortly after they start fighting, the two boys are swiftly separated by Mr. Thorn, who orders Hyland out of his sight and James to his office.

Surma tells Anja she should have zapped Hyland. Anja asks Donald to please excuse them, as she shoves Surma into the ladies' room. Surma asks Anja what the problem is, and she explains that people don't like it when they use their magic, since she's in Queslett now. They get angry. Surma doesn't care if the Court's decided that they have a "predetermination towards etheric sciences", since they were told the Court made a mistake when they were sorted into Chester House. Besides, it was a long time ago. Anja protests that people still won't forget. Surma figures that Anja's concern is about Donny, and reassures Anja that he's their friend and he won't care. As she tells Anja, one day she'll realize she won't have to hide who she is just to fit in. They leave the bathroom to find Donny waiting for them, and Surma says it's just the three of them for lunch, then. She then arranges for Anja and Donny to be linking arms, much to their embarrassment.

James defends himself to Mr. Thorn by explaining that Hyland started it, because he's a jackass. Thorn replies that he's not blind or stupid. He knows how people are around here, but that doesn't excuse what James did. If he'd been stopped by any other teacher, he might be facing expulsion. However, Thorn cannot dismiss the noble act of standing up for a friend. He tells James that he needs to keep his temper in check, as he loses it too easily. Thorn unveils a set of armour with a familiar symbol on the breastplate from under a sheet, as he tells James he has a future at the Court. He asks James if he's ever heard of the Rogat Orjak.

Outside the cafeteria, Surma, Anja and Donny hear an alarm sound, and a trio of robots run up to announce that one exit is currently closed due to a "situation", and that everyone should go about their business. As the three friends walk through a hallway, a giant wooden dog bursts through the windows on one side and out the ones on the other, landing in a courtyard. Surma decides they need to get a better look, and, accompanied by Donny and Anja, runs for the roof. At the door, they find another group of the sign-headed robots, who order them to stop. So Donny breaks out his disruptor, which temporarily shuts them off, and the trio turn the robots the other way. When the robots reactivate, Donny cheerfully tells them they're leaving now, as the three students head onto the roof.

From the roof, they get a better look at the wooden dog, being faced down by a group of Court security robots. Surma and Donny point out the obvious: it's some kind of wooden dog. The Court robots, armed with chainsaws, go on the attack, cutting off one of its limbs. Anja can tell that the creature is some kind of puppet, being called back to the forest. Donny asks how she can tell that, and as Anja refuses to answer, Donny wonders if it's like a drone. Alerted by some leaves, Surma turns around to discover another wooden dog crouching on the roof behind them. As it leaps toward them, Anja is forced to use her magic to protect the trio by casting a shield around them. Donny thinks it was incredible. Surma asks them to save it for later. Suddenly, the beast is impaled by a glowing sword thrown from above. An armoured figure, the Dragon Slayer, retrieves the weapon, and a trio of Glass-Eyed Men flee the scene. James leans over the edge of the roof, saying hi to his friends, and jumps down. Sir Thorn tells him not to forget double cross country tomorrow, and leaps off toward a flying creature above. The other wooden dog, down in the courtyard, jumps up onto a wall. As Thorn, riding the Rogat Orjak, flies off in pursuit of the remaining creature:

Surma: Jimmy?! What's going on?
James: You guys aren't going to believe this... but that guy is our games teacher.