Characters / The Amazing World of Gumball: The Wattersons 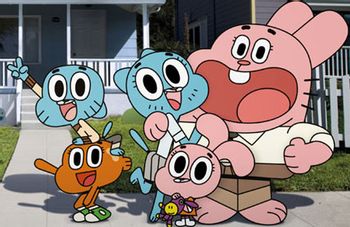 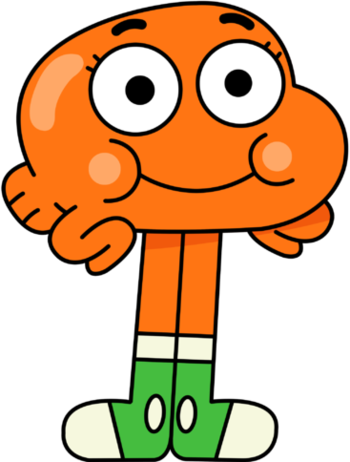 "Sorry, what was that? I was distracted by—Oh look, a shoe!"
Voiced by: Jake Pratt (Early reel), Kwesi Boakye (season 1–season three's "The Kids"); Terrell Ransom, Jr. (the end of season three's "The Kids"-the end of season five's "The Copycats"); Donielle T. Hansley, Jr. ("The Copycats"-"The Cage", with a small part on "The Anybody"), Christian J. Simon ("The Faith"note though "The Anybody" had a short joke that lampshaded the voice change-"The Inquisition", the "Darwin's Yearbook" mini-series), Yumiko Kobayashi (Japanese)
Debut: Early reel/Season 1, "The DVD"
Last appearance: Season 6, "The Inquisition"

Gumball's ten-year-old pet goldfish-turned-family member who sprouted legs, grew in size, and began to talk. Gumball and Darwin are seen as brothers (Darwin even calls Nicole "Mrs Mom" and Richard "Mr. Dad") and attend the same school and class. Darwin is a bit naive due to his forced adaptation among the "normal" world, though he is more rational and moral than Gumball. 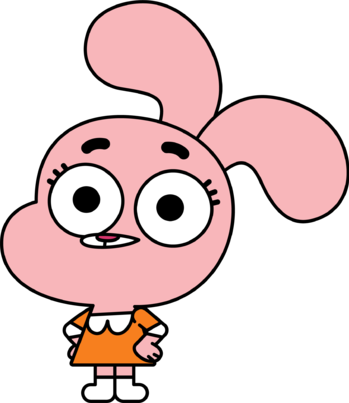 "This plan already reeks of failure."
Voiced by: Kyla Rae Kowalewski (English), Yukiko Hinata (Japanese)
Debut: Season 1, "The Responsible"
Last appearance: Season 6, "The Inquisition"
Gumball's sister, a genius four-year-old pink rabbit. Due to her high intelligence, she attends Gumball and Darwin's middle school as well, one grade higher than them. Despite her competency, she still displays some traits of a typical four-year old.
Doctor Nicole Watterson 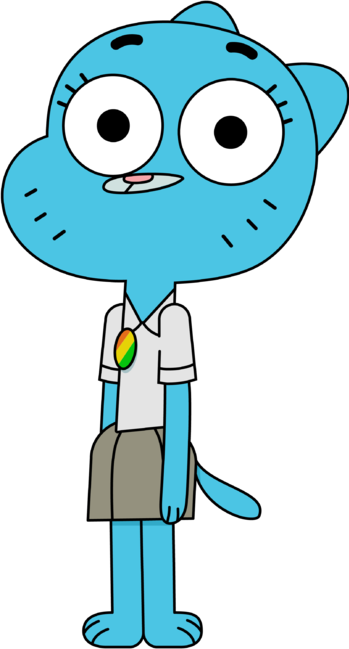 "No, it was the school of life. I have raised three kids and one husband."
Voiced by: Teresa Gallagher (English), Mai Yamane (Japanese)
Debut: Season 1, "The DVD"
Last appearance: Season 6, "The Heart"
The maternal member of the Watterson family (and a blue cat like Gumball). She holds down a job at the Rainbow Factory and appears to be the only member of the family with any sense of responsibility. She's normally collected and organized but when things go awry, she succumbs to violent bouts of anger (almost always sparked by her sons).
Richard Buckley Watterson 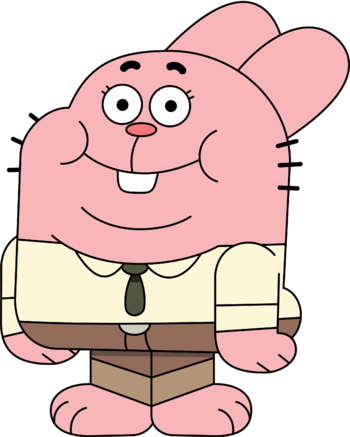 "They shouldn't say 'All you can eat' if they don't mean it!"
Voiced by: Dan Russell (English), Yoshinori Muto (Japanese)
Debut: Season 1, "The Responsible"
Last appearance: Season 6, "The BFFS"
Gumball's father and Nicole's pink rabbit husband. Richard is very immature for his age and hates to have any sort of responsibility. He is also quite lackadaisical and sleeps frequently. As a result, Nicole is usually forced to be the parent to their children, but she's not home a lot, so Richard's often the only one available.
Advertisement: 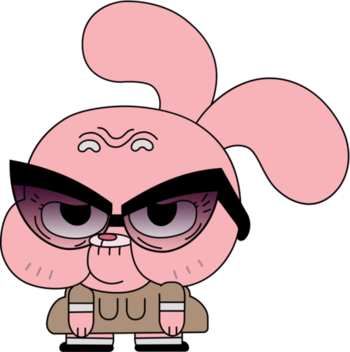 Richard's mother, another pink rabbit. She is overprotective of Richard, antagonistic towards Nicole, and a pretty bad care-taker to Gumball, Darwin, and Anais. 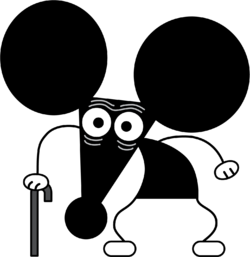 "I was gonna suggest we could settle this by sitting down, and having a calm, reasonable conversation."
Voiced by: Dan Russell (The Colossus and The Kids) Shane Rimmer (The Extras onwards)
Debut: Season 1, "The Debt"
Last appearance: Season 6, "The Web"

A former member of the Senior Citizens who is an Off-Model Mickey Mouse-looking rodent and Granny Jojo's boyfriend in season 3. He later marries her in season 4 and officially becomes part of the Watterson family as Richard's stepfather and the kids' step-grandfather. 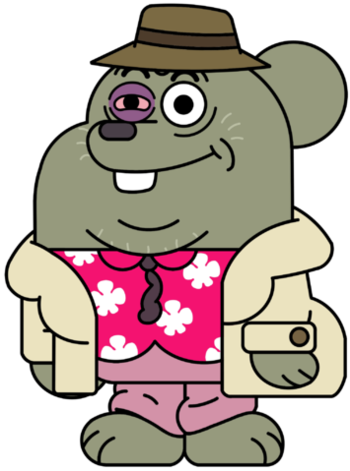 "It's perfectly normal to be nervous your first time driving... a getaway car."
Voiced by: Rich Fulcher
Debut: Season 4, "The Signature"
Last appearance: Season 6, "The Anybody"

Richard's deadbeat father, a gray rat surprisingly, who left him and Jojo when Richard was very young. 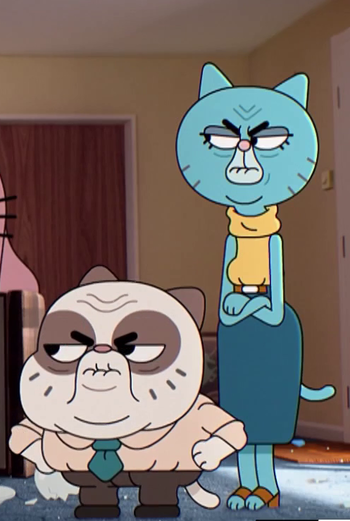 Daniel: "We only wanted the best from you. Why settle for B-minus when you can have A-plus?"
Mary: "We gave you every possible chance to succeed!"
Daniel Senicourt voiced by: Garrick Hagon
Mary Senicourt voiced by: Liza Ross
Debut: Season 5, "The Choices"
Last appearance: Season 6, "The Web"

A ferocious turtle that Richard bought from a van shop, thinking she was a dog.