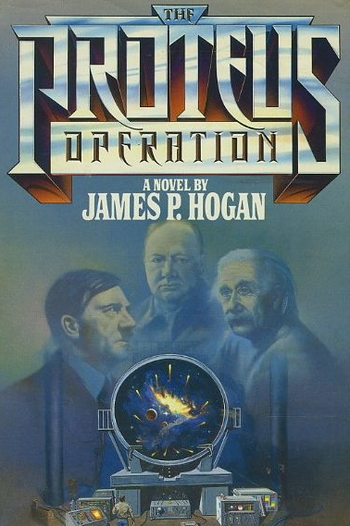 Nineteen thirty-nine, Harry! That's the next mission! We're going back to the world of 1939!
Advertisement:

The Proteus Operation is a 1985 Time Travel / Alternate History book by James P. Hogan. The year is 1975, and America, Canada, and Australia are the foremost surviving free countries. The rest of the world fell to the Axis powers in World War II, after the Germans devastated Moscow with a nuclear bomb.

The Japanese Empire is pressuring President John F. Kennedy to cede Hawaii to them, isolating Australia. The President has promised "No more surrenders", but everyone knows this will lead to a war the US cannot win.

A possible solution has been found. It has been discovered that the Nazis were aided by time-travelers from the future; perhaps this America can send people back to prevent this disaster in the first place. A crack team of scientists and commandos go back to save the present by fixing the past.