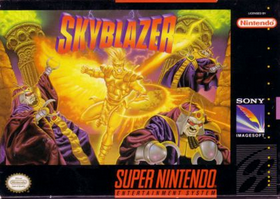 Skyblazer is a 1994 action-platform game for the Super Nintendo, developed by Ukiyotei Company and published in North America by Sony Imagesoft. A young sorcerer named Sky witnesses the kidnapping of the sorceress Arianna by a demon named Ashura, and is knocked out. When an old man rescues him, he tells Sky that he must become stronger to stand a chance against Ashura, and Sky sets off into the land to do so.

The game has a Super Mario World-style overworld, with Mega Man-style stages where Sky earns a new ability after defeating each of the bosses. All of these abilities must be collected before Sky can reach Ashura.