Spoilers for Mighty Morphin' Power Rangers (2016), Go Go Power Rangers and Shattered Grid will be left unmarked. You Have Been Warned! 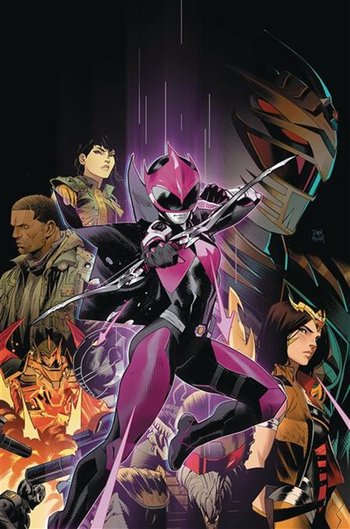 Power Rangers: Drakkon New Dawn is a 2020 comic series published by Boom! Studios based on the Power Rangers franchise, tying into their ongoing adaptation of Mighty Morphin' Power Rangers. It was preceded by a one-shot, Power Rangers: Ranger Slayer, with the Free Comic Book Day 2020 special serving as a prologue to the one-shot. The one-shot and series serve as an epilogue to Shattered Grid, focusing on what happened to Lord Drakkon's home universe after his defeat.

Power Rangers: Ranger Slayer follows the Ranger Slayer - Kimberly Hart, the former Mighty Morphin' Pink Power Ranger - as she returns home to a world that remembers her as a villain, faced with the friends she had been mind controlled into betraying and the enemies she was forced to fight alongside, as an old foe returns as a terrifying new threat.

In Power Rangers: Drakkon New Dawn, Kimberly is determined to purge the terrifying hold that Drakkon has had over her world, starting with Deadlock; the prison tower where Drakkon held all those who opposed him. But even the Ranger Slayer has no clue of the true power kept in Deadlock—and what unlocking the doors will set into motion. As Kimberly investigates the worst of Drakkon’s secrets, she sets in motion Drakkon’s final plan