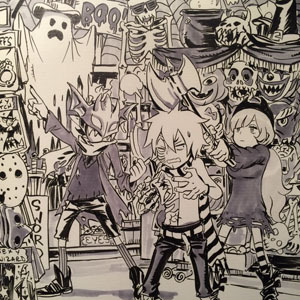 From left to right: Kazu, Nemo and Pandora.
"This is the tale of Scarlet Crown's Pride and of Hemlock Heart where prejudice is decried. Although these events seem like a dreadful ride, the devils of the world always take them in stride. Yet there is one girl who may turn the tide..."

is a webcomic about 14 year old Kazu, a kind and optimistic young imp living in a setting populated by devils. Working last minute on a science project with some help from his best friend Nemo, he creates Pandora: a stoic zombie girl confused by the strange world she's been brought into. Now living together with her creator, the comic describes their daily struggles of day to day life in a devil's world.

The comic is known for its detailed backgrounds and stylistic panels. It currently updates every Monday and Friday and as of April 2015, it's completed its first chapter.

This webcomic is notable for having its start as the first grand prize winner of Tokyopop's Rising Stars of Manga contest back in 2002, as well as one of its creators being voice actor and ADR script writer Clint Bickham.