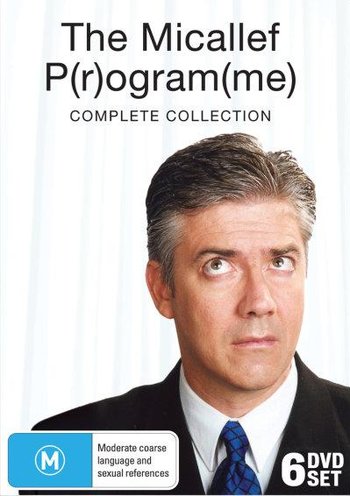 The Framing Device was of a Variety Show hosted by an extremely smarmy host named Shaun Micallef. The show played on the banality of middle-of-the-road Variety Shows, with Obligatory Game Show Segments featuring increasingly bizarre games and contestants, interviews Shaun would ruin with his inflated ego, and a constant stream of incomprehensible three-second variety acts.

In-between all of these segments were various sketches which employed a great deal of surreal, observational humour- often played completely straight- that subverted, even deconstructed various expectations and media genres. The amount of surreal humour greatly increased with each season, to the point where Series 3 bears little resemblance to reality.

The show was renamed The Micallef Programme for its second series in response to a number of viewer complaints that they were spelling "program" incorrectly ("Certainly don't get that level of pedantry from viewers of commercial television.") For the third series, they changed the name again to The Micallef Pogram, which is arguably far more offensive.