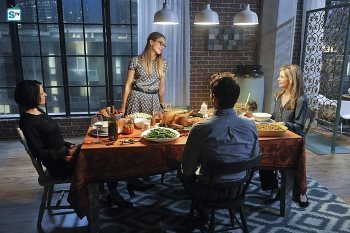 Keeping up with the Danvers.
"This is Leslie Willis, coming to you live and wired from CatCo Plaza. The week of Thanksgiving, which means it is time for my annual list of things I am not grateful for. And this year's list is only one item: Supergirl."
— Leslie Willis
Advertisement:

We open on the secret underground base of the DEO, where an alien prisoner being transferred. Unfortunately, the alien breaks loose. This looks like a job for Supergirl. With some flight and strength, Supergirl defeats him. Excuse me, her.

It's Thanksgiving, and that means turkey, and awkward family gatherings, even for superheroes. Kara and Alex are nervous about Mother Danvers coming to visit. Alex is worried that her mother is going to blame her about Kara's coming out, while Kara remains optimistic. Meanwhile, CatCo's resident Shock Jock and radio personality Leslie Willis is doing her annual holiday roast... of Supergirl. Of course, this has consequences. Cat, in a moment of uncharacteristic protectiveness, warns Leslie that her radio stunt will cost her. In fact, she has been transferred to traffic reporting for the foreseeable future. Kara invites Winn over for Friendsgiving dinner.

As Willis attempts to buckle down and finish her punishment, a freak lightning storm knocks her helicopter out of the sky. Supergirl manages to rescue the pilot, and comes back to grab Leslie... only to get struck by lightning while holding the reporter. Cue white hair and a coma.

Kara and Cat visit Leslie in the hospital, although Cat really doesn't seem to want to be there. Of course, when they leave, lightning begins sparking around. Meanwhile, at Kara's apartment, the inevitable fight between mother and daughter begins. Eliza attempts to guilt trip Alex for letting her sister fight aliens, not knowing that Alex herself is looking after her through the DEO. We are shown a flashback of the girls as kids, the first time Kara brought Alex along for a flight.

Somehow, a confused Leslie has ended up outside of the hospital. A scumbag attempts to grab her, only to find a shocking twist: Leslie now has lightning powers. She smiles evilly, before vanishing into a bundle of energy which proceeds to ride the city's electrical system.

Back at the Danvers Thanksgiving dinner, Kara helps reheat the turkey with her laser vision, while Winn merely looks at the pie lustfully. Kara attempts to defuse the tension in the room with her plucky personality, but fails to notice Winn's bitterness when she gets a call from James from his out of town trip with Lucy. Meanwhile, Alex finally admits she works for the government as Kara advised. The result, a fight. Flashback to the aftermath of Kara and Alex's flight together, in which the girls are getting lectured by Mr. and Mrs. Danvers. Then the worst happens, a knock at the door from The Men in Black... led by Hank Henshaw.

At CatCo, Cat asks Kara's help with faulty computers. Kara suggests Winn should look at it, only to get a look of confusion from Cat. Of course, this is when the lights go out and the televisions activate.

Cat: Leslie?
Leslie: No. Leslie Willis is dead. D-E-A-D Dead. This is Leslie 2.0. Livewire. And we're going to have words.

As the newly christened Livewire appears, Cat tells Kara to run to security for help. Livewire attempts to fry Cat, only for Supergirl to appear. They fight, but after a heat vision/lightning bolt Beam-O-War shows that Livewire can absorb energy, Supergirl tries punching her. Livewire is injured, but takes the opportunity to drop Cat's elevator and get away. Supergirl stops the elevator at the last moment.

The DEO arrives to check the scene for evidence. Henshaw realizes that Kara was the X factor that gave Leslie superpowers, and even has an idea how to fight them. Of course, before they can do that, Kara has to handle Cat. In discussing her family, Kara reveals to Cat her status as a foster kid. Meanwhile, Cat reveals her own strained relationship with her mother. She also admits that Leslie turning into Livewire was a long process that was her fault.

Back at the Danvers apartment, Alex and Eliza make up. Alex asks why she was always harder on her then Kara. Eliza admits it was because Kara was a scared little girl from another world, while Alex was her daughter and therefore could take it. Alex gets a call from work and has to leave. Meanwhile, Cat and Supergirl meet up and hatch a plan to capture Livewire.

The DEO supplies a device that Kara compares to the trapper from Ghostbusters, only to get dirty looks. Meanwhile, Cat uses Leslie's old radio station to lure the supervillainess in. Cat snarks with her former protege, delaying her long enough for Supergirl to arrive. A fight ensues, and the amount of energy that Leslie has consumed is enough to form energy constructs. She takes the upper hand and knocks away the DEO's trap. It's all over.

Until Supergirl punctures the waterline with her fist and sprays down Livewire. The former shock jock is knocked unconscious.

The next day, and Kara is bringing Winn turkey day leftovers as payment for being there during her family's fight. Winn admits that his father is in prison, and definitely deserves to be there. He then says that the thing he was most thankful for... was Kara. He gives her a kiss on the cheek, right before James and Lucy walk in. Bummer.

Cat Grant seems to have come out the other end of this incident a different person. Instead of the normal news cycle stories about celebrities embarrassing themselves on the holiday, she decides to run stories of the humanitarian acts of the holidays. She admits there is a lot that she does not know about Kara... and then goes back to her usual self.

Eliza is packing up to head back home, but not before showing her pride for her daughters. She then leaves a warning, that the DEO was involved in Jeremiah Danvers's death. In another flashback, Henshaw threatens the Danvers as he attempts to take Kara to raise as a weapon. Jeremiah comes forward and volunteers his knowledge and research on Superman in exchange for Kara's freedom.

In the present day, Henshaw celebrates the DEO's first non-extraterrestrial metahuman prisoner, before telling Supergirl to get back to work. Supergirl and Alex then agree that they have to find the truth about their father's death.