Tabletop Game / The Riddle of Steel 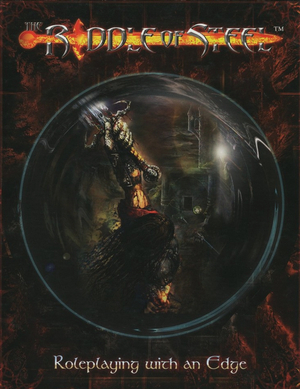 What is the Riddle of Steel?
It is invincibility—to strike with all and to be struck by none.
It is understanding—to ask questions and to know the answers.
It is peace—to walk without fear, to know that the end is in your own hands.
It is skill—to feel the elegance found in violence, and to know the beauty found in stillness.
It is Spirit—To gaze into the face of your God and to know him before he comes for you.
Advertisement:

The Riddle of Steel is a d10 tabletop RPG published in 2002 by the now defunct Driftwood Publishing. The system is set in a Low Fantasy equivalent of Earth called Weyrth and prides itself on historical accuracy and a realistic combat system.

The designer, Jake Norwood, was a senior Free Scholar in the Association for Renaissance Martial Arts and is the current president of the Historical European Martial Arts Alliance. As such, there is a corresponding increase in the level of historical accuracy when The Riddle of Steel is compared to other systems, such as Dungeons & Dragons or GURPS.

A fifth book, Of Sorcery and the Fey, was planned, but Driftwood Publishing went bust before it was published.