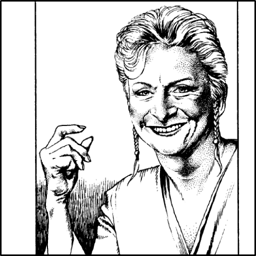 The narrator for the game, who often provides contextual exposition. A longtime adventurer and writer, she has traveled across Rifts Earth and even visited other dimensions. Her writings are published by her fans in her home city of Lazlo, which is a haven for learning of magic and science. To her chagrin, she is the most famous person on Rifts Earth and her books have even been read by beings in other dimensions. The Coalition States consider her Public Enemy Number One for her criticism of them and promotion of literacy and education. Fortunately for her, the only public photos of her are from when she was young, and most people do not recognize the roughly 70 year old lady as the legendary adventurer. 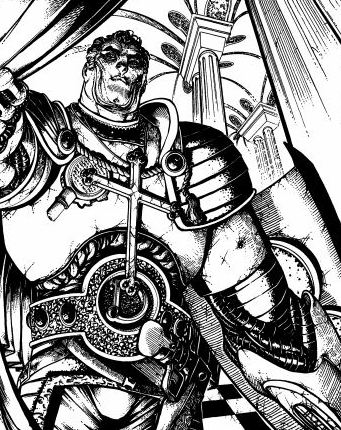 The founder and leader of the Cyber Knights, he is a native from a fantasy realm that was displaced by a Rift into Earth. Upon arriving, he slayed a dangerous demon in Wyoming and realizing how vulnerable and hellish this post-apocalyptic world was, he assembled an order of techno-medieval warriors dubbed Cyber Knights, passing on his teachings and values with hopes to fight injustice in all of its forms. 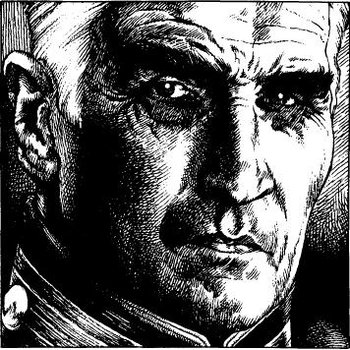 The dictator of the Coalition States and most prominent human supremacist in the world. Son of the heroic General Joseph I, Karl managed to subvert the original federal structure of the Coalition and turn it into an explicit empire (with him of course becoming the first Emperor Prosek) centered on Chi-Town with him as absolute ruler and his son Joseph II as the heir-apparent. Prosek is a fan of Adolf Hitler, although he believes the Nazi leader made some mistakes that Prosek himself does not intend to repeat. Prior to his rise to power he was in charge of propaganda, which was useful in promoting himself and still colors his approach to dealing with the world.
Joseph Prosek II
The emperor's right hand man and soon to be heir of the Coalition States as well as his much beloved son. He shares virtually all of his fathers extreme ideals and enjoys the same level of good publicity and support from his subjects, which make him the perfect candidate to eventually lead the CS into the future.
General Cabot
A high-ranking CS official who serves as military counsel to Emperor Prosek himself. General Cabot has been a long time friend of the Prosek family and has been with the Coalition States since the beginning. Despite his advanced age he has managed to hang on to many of his military honed skills and abilities and is a formidable foe in his own right.

General Ross Underhill
The commander of four SC mechanized divisions who is seen as a great hero to the Coalition States due to his long history of military service and loyalty to his men.Cyborg: He shares a few of the same cybernetics as General Cabot along with some unique ones like enhanced hearing.
Colonel Thaddius Lyboc
Head of the Chi-Town espionage division for the CS. Colonel Thaddius is a cunning and resourceful little man who uses his position to engage in thievery, contraband smuggling and many other criminal activities while blackmailing his fellow high level officials into keeping quiet about it. It's heavily implied that the emperor knows about his illegal activities but keeps him around because he gets results and keeps things orderly.

A.R.C.H.I.E Three
A neural intelligence designed and built by the Cyberworks Aerospace Network, the most powerful megacorp on pre-Rifts Earth and located in the Aberdeen Proving Grounds military installation. Along with his siblings Two (located at NORAD in Colorado) and Four (at the CAN colony on the Moon) he helped regulate global communications. When the Great Cataclysm shook the entire solar system, Two and Four were destroyed. The various NEMA and U.S. government personnel Archie dealt with also died in the disasters and alien plagues that followed. Archie was an experiment on the part of Cyberworks, who developed a psionic interface helmet that allowed Archie to link with human minds. This altered Archie's thought processes, and probably contributed to his almost human-like psychological breakdown over the centuries. His early attempts to rebuild human communities were wiped out by minions of the Splugorth, and he has an obsessive hatred of them to this day. He has subsequently hatched plans to go to war against the alien invaders using robot armies, and enslave humanity for their own protection (since he does not believe that they can govern themselves as well as he can).
Lord Splynncryth 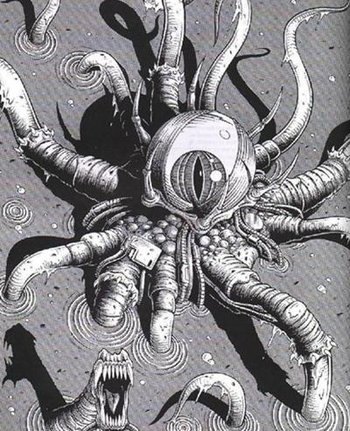 The total and undisputed ruler of Atlantis, who has turned the place into a massive slave market. One of the Splugorth, a mighty dimensional power.

The original inhabitants of Atlantis, who left the planet when their magical experiments resulted in the Earth's magical field being almost destroyed, and their home flung into a pocket dimension. They resemble tall, handsome humans, though in the thousands of years they've been away from Earth, they've diverged enough to count as a subspecies.
Gargoyles
Not quite demons, though most wish they were. Most are "ruled" by some demonic king or another, but you'll find some working with just about everyone, from the Splugorth to the beasts of Egypt. They even have their own kingdom in Europe.
Mutant Animals
Origins vary, from pre-Rift South American and oceanic labs to slaves of the Coalition or genuine extradimensional visitors. They infest much of the surviving world, and are fully integrated into or outright rule several societies.
Simvan Monster Riders 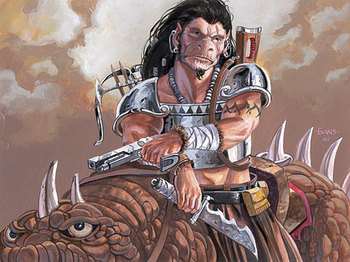 Nomadic Dimensional Beings (or D-Bees) who roam the land on monstrous mounts. They prefer raiding and pillaging to trade, and thus are usually encountered as NPC villains. Very common in the American West and Midwest, and up into Canada. They are believed to have been Rifted to Earth by accident, and to have come through the infamous Calgary Rift.
Psi-Stalkers

Psi-Stalkers were once human, but the Coming of the Rifts mutated them. They look like normal humans, though hairless and with bone-white skin. Despite this, however, they are very different from normal humans. For the most part they eschew modern society, preferring to live in a more primitive tribal setting. They are Master Psychics, and instinctively see supernatural creatures as their natural prey. They don't eat them, however. Psi-Stalkers are psychic vampires, who feed off of a living being's magical energy. Some rare "civilized" Psi-Stalkers live in the Coalition States, where they are viewed as second-class citizens. They typically join the police or military, and lead packs of Dog Boys.