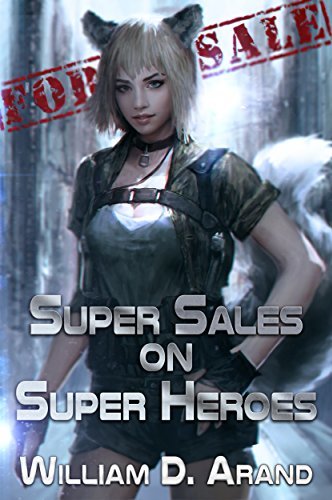 PANCAKES!!!
Super Sales on Super Heroes is a 2017-2018 series of superhero novels by William D. Arand, taking place in a world where superpowers are fairly common. It's a world of Grey-and-Gray Morality, where heroes aren't always the good guys and villains aren't always that bad.
Advertisement:

Felix Campbell lives in a city that has recently been taken over by a supervillain named Skipper. Skipper and his cronies immediately declared independence from the rest of the country, renamed the place Skippercity, and made a number of changes to the law. Many crimes are now legal, including slavery. Despite this, the city's economy is booming thanks to no longer having to pay federal or state taxes, while also taxing any formerly illegal activities. Any remaining superheroes in Skippercity are either killed by citizens for a hefty bounty or captured to be sold as slaves.

Felix has a unique ability to modify any object he owns, which he sees in his mind's eye as a stat sheet, as if in a role-playing game. Any modification costs a certain number of points. Unfortunately his daily pool of points is too low to made good use of his power, so he's stuck in his job managing a fast food joint and living in the house his aunt and uncle left him after skipping town.

All this changes when he accidentally purchases a super-slave (he thought he was buying a box full of bismuth he planned to turn into gold and sell). The super is nearly dead, having been tortured and mutilated for nearly a month. Since he now owns her, his power allows him to modify her as well, but he also learns that he can draw on her power to increase his daily point allotment. Realizing this, he quickly buys two more supers in the same condition. He uses his power to slowly repair their physical damage. To his surprise, after a brief period of adjustment, the three women (Kit, Miu, and Ioana) quickly accept the live of slavery, especially since Felix is actually a pretty decent guy, and one of his first promises is that he would never sexually assault them or force them to sleep with him (slaves are magically-bound to follow direct orders of their master).

Felix hits on the idea of buying a pawn shop, which he can use to buy items for cheap, improve them with his power, and resell them with a sizable markup, especially since Kit trains him to use his power to see stats of potential property, making him a master appraiser. He quickly buys three more slaves at an auction: Andrea, Lily, and Felicia. In less than three months, Felix is now the CEO of a quickly-growing organization of hundreds of slaves and indentured servants and attracting unwanted attention from rivals.

In book 2, Felix expands his operations to the city of Tilen in the setting's US-analog and even to a parallel world. He's even considering setting up an HQ in the neighboring country of Wall.

In book 3 Felix continues trying to expand, having set up operations in Wall after a series of events that leaves the world slowly crumbling apart, only to get surprised by a visitor from a portal he had nothing to do with.