Roleplay / And Justice For All: A One Piece Quest 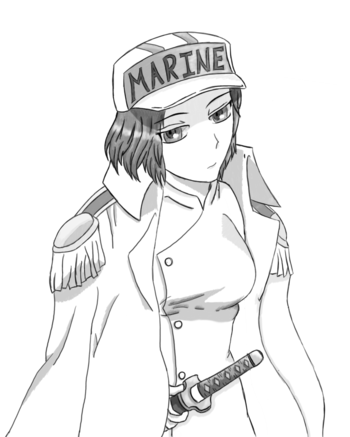 You are a Marine; a Commander, to be precise, newly promoted and now entrusted with command over an entire ship and its complement of soldiers. It took you years of effort to reach this point, working your way up through the ranks with blood and sweat and unflinching dedication, but at last Headquarters has seen your merit and granted you a rank of true command. Your ship is a small one, it is true, but it is yours, and as the highest ranking officer aboard your word is effectively law.
Advertisement:
Your assignment is a simple one; to patrol the seas and keep them safe for all law-abiding citizens of the world government, acting in accordance with Marine regulations and your own best judgement. Of course, what that actually means in practice can vary wildly, especially when it comes to your particular area of operations…
— Excerpt from the front page

Written by Maugan Ra on Sufficient Velocity.com, And Justice For All is a One Piece quest set 15 years after the death of Gol D. Roger, and follows the adventures of Aubigny D. Juliette, a newly promoted Commander in the Marines as she patrols South Blue.

And Justice For All contains examples of: